Charlotte Pass (often erroneously referred to as Charlotte's Pass), elevation 1,837 metres (6,027 ft), is a snow resort and village in the Snowy Mountains of New South Wales, Australia. The pass is in the Kosciuszko National Park where the Kosciuszko Road crosses Kangaroo Ridge. Charlotte Pass is the closest village to Mount Kosciuszko.

The pass and village are named after Charlotte Adams who, in 1881, was the first European woman to climb Mount Kosciuszko.

Charlotte Pass provides access to some of Australia's highest alpine terrain and was formerly a stop-off point for public vehicular access to Mount Kosciuszko, though the public access road now terminates at the Pass. Being an alpine area, it is subject to extremes in temperature, and is a recognised environmentally sensitive zone.

The Snowy Mountains region is thought to have had Aboriginal occupation for some twenty thousand years. Large scale intertribal gatherings were held in the High Country during summer for collective feasting on the Bogong moth. This practice continued until around 1865. The area was first explored by Europeans in 1835, and in 1840, Edmund Strzelecki ascended Mount Kosciuszko and named it after a Polish patriot. High country stockmen followed who used the Snowy Mountains for grazing during the summer months. Banjo Paterson's famous poem The Man From Snowy River recalls this era. The cattle graziers have left a legacy of mountain huts scattered across the area. Charlotte Pass itself is named after Charlotte Adams who, in 1881, became the first European woman to climb Mount Kosciuszko, Australia's highest peak.

Looking through Charlotte Pass towards the main range in winter. 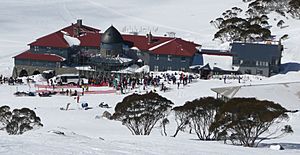 The Chalet during August

The historic Kosciuszko Chalet was the first building at Charlotte Pass village, and was opened on 10 May 1930. The Chalet at Charlotte Pass was one of several alpine area accommodation facilities built by government in Australia, and offered an opulent life style at the time. The Chalet burnt down in August 1938, and a new Chalet was built in its place the following summer. The Chalet is still the largest and most significant building in the village, and remains the heart of the village in winter.

Skiing in Australia had begun some six decades earlier at Kiandra in the Northern Snowy Mountains, but the first Kosciuszko Chalet built at Charlotte Pass in 1930 gave relatively comfortable access to Australia's highest terrain. At 1760m, Charlotte Pass has the highest village base elevation of any Australia ski resort and can only be accessed via over-snow transport in winter. The growing number of ski enthusiasts heading to Charlotte Pass led to the establishment of a cafe at Smiggin Holes around 1939, where horse-drawn sleighs would deliver skiers to be begin the arduous ski to the Kosciuszko Chalet. It was the construction of the vast Snowy Mountains Hydro-Electric Scheme from 1949 that really opened up the Snowy Mountains for large scale development of a ski industry and led to the establishment of nearby Thredbo and Perisher as leading Australian resorts. Kosciusko Alpine Club was the first ski club to build its own lodge here in 1952, having occupied the Chalet earlier. Other club lodges were built soon after.

Ski fields beyond Charlotte Pass and up by Kosciuszko's side were also established during this period, though their existence is now little realised. The Australian Alpine Club was founded in 1950 by Charles Anton with a view to establishing a chain of lodges for ski touring across the Australian Alps. Huts were constructed in the "Back Country" close to Mount Kosciuszko, including Kunama Hut, which opened for the 1953 season. A rope tow was installed on Mount Northcote at the site and opened in 1954. The site proved excellent for speed skiing, but the hut was destroyed in an avalanche, which also killed one person, in 1956. In 1964, Australia briefly boasted the "World's Longest Chairlift", designed to carry skiers from the Thredbo Valley to Charlotte Pass, but technical difficulties soon closed the facility.

The village and resort precinct are part of the Kosciuszko National Park, and the village is leased to and operated by Charlotte Pass Village Pty Ltd (CPV) until at least October 2017. Apart from the Chalet, the village contains 12 commercial and club lodges, and has the capacity to hold 607 guests.

Charlotte Pass has a subpolar oceanic climate (Köppen Cfc) or a subarctic climate (Dfc) depending on which isotherm for the coldest month is used, though the higher peaks have a tundra climate (ET). It has the coldest recorded temperature in Australia (excluding Antarctic territories), of −23.0 °C (−9.4 °F) on 28 June 1994.

Annual rain fall averages 2329.6 mm, with about half falling as snow between May and September, although conditions result in snow depth typically never exceeding 2.5 m to 3 m. Official snow depths are not recorded for Charlotte Pass, but are recorded by the Snowy Hydro Limited at nearby Spencers Creek (elev. 1,830 m). A typical snow depth at its peak is about 2 m. Summer rain is usually in the form of thunderstorms, which, due to the area's elevation, can carry large quantities of hail, and severe hailstorms generally occur a few times each summer.

Snow has been recorded at all times of the year, some persisting on the ground for days even in the middle of summer. While snow falls at unexpected times can add interest to the area, they are typically associated with very severe weather events, which can also cause havoc with disastrous consequences. For example, weather patterns bringing snow on Boxing Day and the following day in 1998 caused loss of life in the Sydney to Hobart yacht race that year.

The area has been long been used as a base for environmental research, for example for plankton studies in the nearby post glacial lake Blue Lake in 1937 using a flat bottomed boat, and more recently, for example in 1997 as a heliport for studies of the mountain pygmy possum.

Of major faunal significance is the endangered mountain pygmy possum (Burramys parvus), which from 1894 until 1966 was only known from the fossil record, and the threatened broad-toothed mouse. These small marsupials are adapted to mountain life, however most other Australian animals find it hard to survive the cold climate and heavy snow. Animals that do manage to survive in the area and are occasionally seen include eastern grey kangaroos, wombats, platypus, crows, magpies, crimson rosellas, flame robins, and introduced animals such as rabbits, foxes and red deer.

An area between Kangaroo Ridge, Mount Stillwell ridge, and Guthries Ridge is formally designated as the Charlotte Pass Alpine Resort.

It is the oldest and highest ski resort in Australia.

The resort contains five ski lifts, one triple chairlift, one T-bar, two platter lifts and a beginner's moving carpet (which replaced a rope tow in 2008), accessing 50 hectares of skiable terrain. The highest lifted elevation is 1,964 m; the base elevation 1,755 m; giving a downhill skier's vertical of 210 m. The resort currently only lifts to part of its leased area. A small terrain park was first constructed in 2008. The resort has a few mobile snow guns to top up high traffic areas and help open difficult terrain areas earlier in the season. A list of all ski lifts to have operated at Charlotte Pass can be found at the Australian Ski Lift Directory.

The resort is also very popular with cross-country skiers, as the village provides immediate access to Australia's highest peaks.

The resort receives, on average, more natural snow than other Australian resorts because of its elevation. In 1981, one weather event dropped snow to the extent that the Kangaroo Ridge triple chair terminus was buried in snow, over the top of the pylon, by the cornice by up to 0.5 m. This level of snow fall is an exception.

The Charlotte Pass ski area might be the only area in Australia with viable natural snow in several years' time, owing to the impact of global warming.

During the summer, Charlotte Pass is a base for bushwalkers with intent to walk to the top of Mount Kosciuszko and access the Main Range. The mountain is an 18 km round trip via the Summit Walk, or a 22 km loop via the post glacial Lakes Walk. A fine view of the Main Range and headwaters of the Snowy River can be seen from the Snow Gums Boardwalk at Charlotte's Pass and the walk to the summit traverses sub-alpine woodland on the Guthrie Range. Mount Kosciuszko itself is visible from the first lookout. 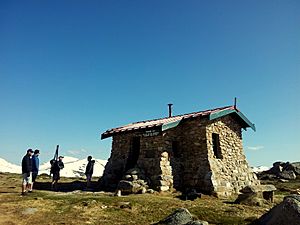 The Charlotte Pass to Kosciuszko walk follows the old Summit Road, which was closed to vehicles in 1976. It crosses the Snowy River at 4.5 km and then ascends gradually to Seaman's Hut (6 km), Rawson's Pass (8 km) and finally, the summit of Mount Kosciuszko.

The Charlotte Pass to Blue Lake walk crosses the Snowy River before ascending through alpine herbfields past Hedley Tarn lookout to Blue Lake lookout. The Blue Lake is one of only four cirque lakes found in mainland Australia and contains the best-developed glacial features in the Kosciuszko National Park alpine area of New South Wales. The Lake can be accessed by a 4-hour round-trip walk from Charlotte Pass.

A shorter and easier walk to the Kosciuszko summit can be accessed via Thredbo. Other guided walks are also available.

In summer, access is by Kosciuszko Road from Jindabyne.

In winter, the area is snow-bound and can only be accessed by snowmobile from the Perisher Valley SkiTube terminal, which lies 8 kilometres to the north east, also via Jindabyne. Charlotte Pass Village Pty Ltd operates a fleet of three 18 seat 4x4 buses running on snow tracks and one 17 seat (incl. Driver) Pisten Bully snow cat, which ferry visitors in and out of the village every half hour or 15mins in peak times.

The area has not always been regarded as being easily accessible to all people. In the mid 20th century, the Chalet at Charlotte Pass was referred to as a breeding ground for snobocracy by local politician John Wesley Seiffert who by public criticism obtained a reduced bus fare to the area, thus opening the snowfields to a wider range of people.

All content from Kiddle encyclopedia articles (including the article images and facts) can be freely used under Attribution-ShareAlike license, unless stated otherwise. Cite this article:
Charlotte Pass, New South Wales Facts for Kids. Kiddle Encyclopedia.