Jindabyne is a town in south-east New South Wales, Australia that overlooks Lake Jindabyne near the Snowy Mountains, in Snowy Monaro Regional Council. It is a popular holiday destination year round, especially in winter. This is due to its proximity to major ski resort developments within the Kosciuszko National Park, including Thredbo, Perisher and Charlotte Pass.

Originally situated on land that is now under Lake Jindabyne, the township was transferred to its present location in the 1960s due to the construction of Jindabyne Dam, on the Snowy River, as part of the Snowy Mountains Scheme. At the 2016 census, Jindabyne had a population of 2,629 people. The town's name is derived from an aboriginal word meaning "valley".

Jindabyne is one of the highest settlements of its size in Australia, at 918 metres above sea level. Snowfalls regularly occur during winter. In mid-July in 2004 and 2005, snow fell up to half a metre following freak snowfalls over a large area of New South Wales. Jindabyne is connected to the surrounding area by Kosciuszko Road & North via Canberra, the Alpine Way West to the Riverina and Wodonga and the Barry Way to the South and Gippsland.

Originally situated on a site that is now under the waters of Lake Jindabyne, the township was relocated to its present position in the 1960s before the damming of the Snowy River as part of the Snowy Mountains Scheme. The Scheme was developed from the 1940s as a way of increasing the flow of inland rivers in order to encourage the development of primary industries based on irrigation, and to create hydro-electricity.

Completed in 1967, Jindabyne Dam is a major dam, located approximately 2 kilometres (1.2 mi) south south-east of the relocated township. Parts of Old Jindabyne can be seen when the levels of Lake Jindabyne are low particularly the top of the church. The settlement of East Jindabyne is located above what was Old Jindabyne. The dam's main purpose is for the generation of hydro-power and is one of the sixteen major dams that comprise the Snowy Mountains Scheme, a vast hydroelectricity and irrigation complex constructed in south-east Australia between 1949 and 1974 and now run by Snowy Hydro.

Jindabyne is a service town for Australia's highest ski resorts: Perisher, Thredbo and Charlotte Pass. Thredbo and Perisher are approximately 30 minutes drive into the Kosciuszko National Park, although require the payment of park entry fees ($29 per vehicle per day) and the compulsory carrying of snow chains in winter for cars without 4WD. However, Jindabyne also attracts tourists in summer with Lake Jindabyne popular for activities such as fishing, water skiing and wakeboarding.

The town is heavily tourist-oriented with a large range of snow-sport rental outlets and accommodation facilities. Prices can be heavily increased during the peak winter season, although they generally remain lower than those of outlets within the national park and ski resorts.

Lake Jindabyne is a popular sailing, walking and fishing destination. The body of water is one of the largest fresh water reservoirs in New South Wales, and has a resident population of Atlantic Salmon, Brook Trout Brown trout and Rainbow Trout. Lake Jindabyne also has a reputation as one of the best places to catch trout in Australia. The Gaden Trout Hatchery, located about 10 kilometres north-west of Jindabyne, on the route leading to Perisher Ski Resort, holds tours of the hatchery's trout ponds, and is one of Australia's main centres involved in the breeding and rearing of cold water sport fish. 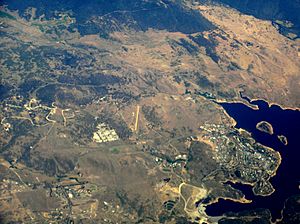 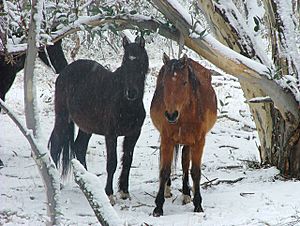 All content from Kiddle encyclopedia articles (including the article images and facts) can be freely used under Attribution-ShareAlike license, unless stated otherwise. Cite this article:
Jindabyne, New South Wales Facts for Kids. Kiddle Encyclopedia.