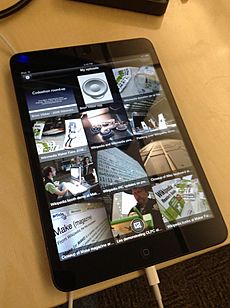 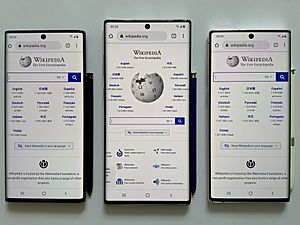 A mobile application, also referred to as a mobile app or simply an app, is a computer program designed to run on smartphones, tablet computers and other mobile devices. Apps are usually available through an app store for that platform. These began appearing in 2008. The largest stores are operated by the owner of the mobile operating system.

Some apps are usually bundled with the device, already installed before you buy it. Other apps may be downloaded for free from the app store, and some must be purchased. Software developers make as they make other computer programs, and usually offer them through the app store.

All content from Kiddle encyclopedia articles (including the article images and facts) can be freely used under Attribution-ShareAlike license, unless stated otherwise. Cite this article:
Mobile app Facts for Kids. Kiddle Encyclopedia.