Division of Eden-Monaro facts for kids 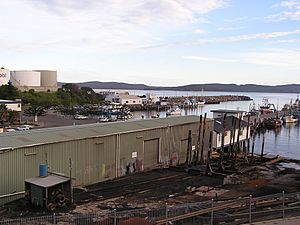 The Division of Eden-Monaro is an Australian electoral division in New South Wales. It was one of the 75 divisions set up for the first federal election in 1901. It is named for the town of Eden and the Monaro district of southern New South Wales. It includes Batemans Bay, Bega, Cooma and Queanbeyan.

Since 1972 the Division has always been won the party that wins government in the elections. It is closely watched by the media when trying to pick the results of an election.

There was a by-election in Eden-Monaro in 1926 after the death of the sitting member, Sir Austin Chapman.

All content from Kiddle encyclopedia articles (including the article images and facts) can be freely used under Attribution-ShareAlike license, unless stated otherwise. Cite this article:
Division of Eden-Monaro Facts for Kids. Kiddle Encyclopedia.