Kids Encyclopedia Facts
Not to be confused with National Party of Australia. 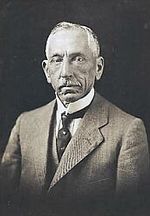 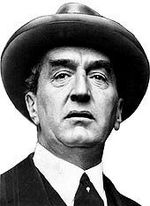 The Nationalist Party of Australia was an Australian political party. It began on 17 February 1917 when the conservative Commonwealth Liberal Party and the National Labor Party (NLP) joined together. The Nationalist Party held government until 1929. It was the major opposition to the Labor party. In 1931 it joined with a group who left the Labor Party led by Joseph Lyons and became the United Australia Party. This was the basis of the Liberal Party of Australia which began in 1944.

In October 1915 Prime Minister Andrew Fisher retired. The Australian Labor Party (ALP) chose Billy Hughes to be the new leader and Prime Minister. He was a strong supporter of Australia's participation in World War I. After a visit to Britain in 1916 he decided that conscription was necessary to get enough soldiers for the Australian army. Most of his party, especially the trade unions, did not support conscription. There were also many Irish Roman Catholics in the Labor Party who did not want to support the British government. This was because of the British government's actions against the Irish Easter Uprising of 1916. In October Hughes held a plebiscite to get support to start conscription, but the plebiscite was narrowly defeated. Melbourne's Catholic Archbishop, Daniel Mannix, was his main opponent on the conscription issue. Hughes continued to argue in favour of conscription. This produced a deep and bitter split within the Australian community, as well as within the members of his own party.

On 15 September 1916 NSW branch of the Labor Party forced Hughes from the Labor Party. When the Federal Parliamentary Labor caucus met on 14 November 1916, there was a lot of argument. Hughes and 24 other Labor members walked out. The remaining 43 members passed a motion of no confidence in the leadership. This removed Hughes and the other members from the ALP.

Hughes and his followers formed a new party, the National Labor Party. They were able to govern with support from Joseph Cook and his Commonwealth Liberal Party. In February 1917, the two groups joined to form the Nationalist Party, with Hughes as leader and Cook as deputy leader. The Nationlists, with Liberal and Labor members, were able to present an image of national unity.

In May 1917 the Nationalists won a huge electoral victory. At this election Hughes abandoned his working-class seat of West Sydney, and was elected for Bendigo in Victoria. Hughes had promised to resign if his Government did not win the power to conscript. A second vote was held in December 1917, but was again defeated, this time by even more votes. Hughes resigned as Prime Minister but, as he was the leader of the majority party, the Governor-General, Sir Ronald Munro Ferguson, immediately asked him to be Prime Minister again. Hughes was able to remain as Prime Minister while keeping his promise to resign.

Hughes and the Nationalists governed on their own until the elections of 1922. The new Country Party gained quite a few seats in the House of Representatives. The Nationalists did not have a majority to govern and needed Country Party support. However, the Country Party did not like Hughes' rural policy. Their leader, Earle Page said he would not serve under him. Many in the Nationalist Party did not fully support Hughes, suspecting he was still really a socialist. Page's demand finally gave them an excuse, and without support Hughes was forced to resign in January 1923. Former Treasurer Stanley Bruce was chosen as leader, and quickly entered into a coalition with the Country Party. The price, however, was high. The Country Party demanded five seats in cabinet (out of 11), including the Treasurer's post and the deputy Prime Minister position for Page. However, Bruce agreed rather than force another election. This was the start of the traditional coalition of non-Labor parties.

Under Bruce's leadership the Nationalists became much more conservative. The Nationalist-Country coalition won a huge victory in 1925. It was reelected in 1928, though with a significantly less support. In 1929 when Bruce tried to bring in new laws to change the industrial arbitration system, this was too much for Hughes. He and his supportes voted against the laws, and the government, no longer controlling a majority, called an early election.

The Coalition was defeated, even Bruce even lost his own seat. He was succeeded as leader by former Attorney-General John Latham. The Nationalists were never a real force in Australian politics again. Having only ever been in government they were not prepared for a role in opposition. However in 1931, a group of Labor Party members led by Joseph Lyons, left the ALP to join the conservatives. They formed a new group, the United Australia Party (UAP). Most of the UAP were former Nationalists, but they chose Lyons as leader and Prime Minister The UAP replaced the Nationalists as the main conservative anti-Labor Party.

Around 1929 Robert Menzies, a member of the Victorian Parliament, joined with Wilfrid Kent Hughes to form the Young Nationalists Organisation. Menzies was its first President.

The organisation kept its name when even when the Nationalists became the UAP. Half the UAP members elected in the 1932 Victorian state election were Young Nationalists. In 1932 the Premier, Sir Stanley Argyle, included three of them in his eight-person cabinet, including Menzies as Deputy Premier.

All content from Kiddle encyclopedia articles (including the article images and facts) can be freely used under Attribution-ShareAlike license, unless stated otherwise. Cite this article:
Nationalist Party of Australia Facts for Kids. Kiddle Encyclopedia.