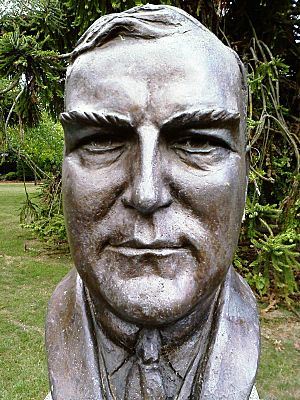 He was Prime Minister for a total of 18 and half years which is the longest in Australia's history. After the death of Joseph Lyons he was elected leader of the United Australia Party and became Prime Minister in 1939. He resigned in 1941 after a lot of criticism. In 1944 he helped form the new Liberal Party. In 1949 he was re-elected Prime Minister. He stayed in the job until he retired in 1966.

According to his biography in the Australian Dictionary of Biography, "Menzies belonged to a generation for whom to be Australian was automatically to be British."

All content from Kiddle encyclopedia articles (including the article images and facts) can be freely used under Attribution-ShareAlike license, unless stated otherwise. Cite this article:
Robert Menzies Facts for Kids. Kiddle Encyclopedia.