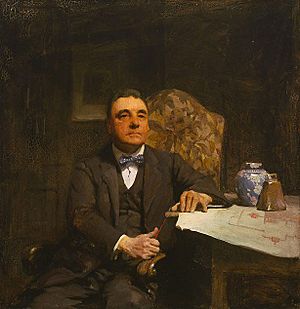 The Archibald Prize is the most important prize for portraits in Australia. It was first awarded in 1921. The money for the prize was left by J. F. Archibald, the editor of The Bulletin magazine who died in 1919. The prize is awarded by the Trustees of the Art Gallery of New South Wales for the best portrait of a person famous in Art, Letters, Science or Politics. The artist must have lived in Australia for at least one year. The Archibald Prize is awarded every year. In 2014 the prize was worth A$75,000. 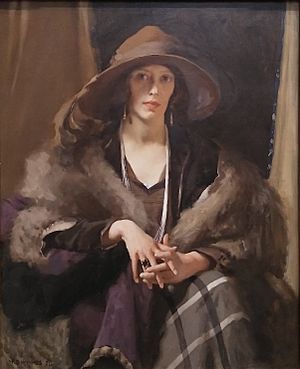 The first prize awarded in 1921 was worth £400. Early winners included William Beckwith McInnes, John Longstaff, and William Dargie. Dargie's painting which won in 1942 had been painted when he was an official war artist during World War 2 in Syria. The ship carrying the painting back to Australia sank and the painting was underwater for some time.

In 1946 the trustees selected works for entry, instead of displaying all the entries. Less than a third of the entries were chosen for exhibition.

Dargie also won 1956 prize with a portrait of Australia's celebrated Aboriginal painter Albert Namatjira. The portrait was done while the Namatjira was visiting Sydney from the Central Desert.

In 1964 and 1980 the prize was not awarded as there were no works that the trustees thought were good enough.

There are usually about 700 entries in the Archibald Prize, but only about 40 are selected as finalists for display. Only one entry is allowed per person each year. Some of the winning artists have had to enter for many years before they made the final display of paintings.

Since 1935 there have been two extra awards added to the Archibald prize event. In 1991 the Packing Room Prize was established. The staff who receive the portraits and put them in the gallery, vote for their choice of winner. Although the prize is said to be awarded by the staff, the gallery's head storeman – as of 2011[update], Steve Peters – holds 51% of the vote. The other award is the Peoples Choice Award in which votes from the viewing public are collected to find a winner. This award also comes with a prize of $2,500. To date, there has never been a matching Archibald Prize winner and a Packing Room Prize chosen in the same year, but there were two Peoples Choice Awards given to Archibald Prize winners in 1988 and 2004.

Twice there has been a matching Packing prize winner and Peoples choice award (neither won the main prize). The first was Paul Newton's portrait of Roy Slaven and HG Nelson in 2001, and second was Jan Williamson's portrait of singer/songwriter Jenny Morris the following year in 2002.

The Archibald is held at the same time as the Sir John Sulman Prize, the Wynne Prize, the recent Australian Photographic Portrait Prize and was held with the Dobell Prize before 2003. The Archibald Prize is the next richest portrait prize in Australia, after the Doug Moran National Portrait Prize. However, the Archibald is the only artist's prize that receives much attention in the general press. Part of the reason is probably that many of the paintings feature well known Australians such as actors, sportspeople, and politicians, making the art more accessible than other genres. It is also longer running with a richer tradition than the newer established portrait prizes.

In 1978 Brett Whiteley won the Archibald, Wynne and Sulman Prizes all in the same year, the only time this has happened. It was his second win for the Archibald and the other prizes as well.

Some paintings which do not make the Archibald Prize finalists are shown at the S. H. Ervin Gallery in the Salon des Refusés exhibition, which began in 1992.

The satirical Bald Archy Prize, supposedly judged by a cockatoo, was started in 1994 at the Coolac Festival of Fun as a parody of the Archibald Prize; it attracted so many visitors that it has moved to Sydney.

All content from Kiddle encyclopedia articles (including the article images and facts) can be freely used under Attribution-ShareAlike license, unless stated otherwise. Cite this article:
Archibald Prize Facts for Kids. Kiddle Encyclopedia.