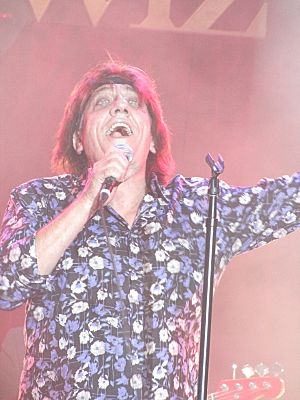 Jonathan James "Jon" English (26 March 1949 – 9 March 2016) was an English-born Australian singer, songwriter, musician and actor. He emigrated from England to Australia with his parents in 1961. He was an early vocalist and rhythm guitarist for Sebastian Hardie but left to take on the role of Judas Iscariot in the Australian version of the stage musical Jesus Christ Superstar from May 1972, which was broadcast on television.

English was acclaimed for his starring role in the 1978 Australian TV series Against the Wind – he won the TV Week Logie Award for 'Best New Talent in Australia'. He also co-wrote and performed the score with Mario Millo (ex-Sebastian Hardie). The series had international release, known as Mot alla vindar (1980) in Swedish, where "Six Ribbons" was released as a single, both single and the soundtrack album peaked at No.1 on the Norwegian charts; the first single, "Six Ribbons" and the album, peaked at No.4 on the Swedish charts.

From 1983 to 1985, English won four Mo Awards with three consecutive 'Entertainer of the Year' awards and a further 'Male Vocal Performer' in 1985. English has performed in Gilbert and Sullivan's operettas The Pirates of Penzance, The Mikado and H.M.S. Pinafore from 1984. Performances of Essgee Entertainment's productions of the Gilbert and Sullivan trilogy from 1994 to 1997 were broadcast on Australian TV. They were all released on VHS and subsequently on DVD.

In late February 2016, English was hospitalised due to "unexpected health problems" and he was forced to cancel several scheduled performances due to planned surgery for an aortic aneurysm. He died following post-operative complications late in the evening of 9 March 2016. A public memorial service commemorating his life was held at the Capitol Theatre, Sydney on the evening of Monday 4 April 2016. The memorial took the form of a tribute concert and included performances by the Foster Brothers, John Paul Young, Simon Gallaher and John Waters, among others.

English described himself as "passionate" supporter of the Australian rugby league team Parramatta Eels. He also supported the Fitzroy Football Club and launched his Some People album at Dallas Brooks Hall in Melbourne in May 1983 as a benefit for the club.

All content from Kiddle encyclopedia articles (including the article images and facts) can be freely used under Attribution-ShareAlike license, unless stated otherwise. Cite this article:
Jon English Facts for Kids. Kiddle Encyclopedia.