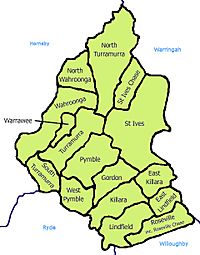 Grave of Gertrude Mary Appleton, last member of the Brown family, who played a large part in developing Wahroonga

Wahroonga is a suburb on the Upper North Shore of Sydney, in the state of New South Wales, Australia 22 kilometres north-west of the Sydney central business district, in the local government area of Ku-ring-gai Council and Hornsby Shire.

Wahroonga is an Aboriginal word meaning our home. In the early days of British settlement in New South Wales, the main activity was cutting down the tall trees which grew there. Wahroonga was first settled in 1822 by Thomas Hyndes, a convict who became a wealthy landowner.

Hyndes's land was later acquired by John Brown, a merchant and timber-getter. After Brown had cleared the land of timber, he planted orchards. Later, Ada, Lucinda and Roland Avenues were named after three of his children. His name has ì in Browns Road, Browns Field and Browns Waterhole on the Lane Cove River. The last member of the Brown family was Gertrude Mary Appleton, who died in 2008 at the age of ninety-three. She is buried in the cemetery of St John the Baptist Church, Gordon.

After the North Shore railway line was opened in 1890 it became a popular place for wealthy businessmen to build out-of-town residences with large gardens. Wahroonga Post Office opened on 15 October 1896. Much of this development occurred in the 1920s and 1930s.

Wahroonga railway station is on the North Shore, Northern & Western Line of the Sydney Trains network. Wahroonga is the Sydney end of the M1 Motorway to Newcastle.

The Rose Seidler House, in Clissold Road, built by Harry Seidler between 1948 and 1950, was one of the first examples of modern residential architecture in Australia.

Highlands, in Highlands Avenue, is a timber house designed by John Horbury Hunt and built in 1891 for Alfred Hordern. Hunt was a Canadian architect who used the Arts and Crafts style and the Shingle Style popular in North America. Highlands is now on the Register of the National Estate.

Architect William Hardy Wilson designed and built his own home, Purulia, on Fox Valley Road. Built in 1913, the home is in the Colonial Revival style and became, according to some observers, a prototype for North Shore homes. It is listed on the Register of the National Estate.

Berith Park, in Billyard Avenue, was designed by F. Ernest Stowe for Alfred Smith, who bought the land in 1897. The house was finished circa 1909.

Westholme, in Water Street, was designed by Howard Joseland in the Arts and Crafts style for John Bennett, one of the pioneer developers of Wahroonga. Bennett came from England but migrated to Australia with his wife and acquired property at Wahroonga in 1893. Westholme was built in 1894. Another house was added at the other end of the block, but this was demolished in 1991 after changing hands several times.

The Gatehouse, in Water Street, was originally part of the John Williams Hospital. It is heritage-listed.

Craignairn, at the corner of Burns Road and Cleveland Street, was also designed in the Arts and Crafts style by Howard Joseland. The client was Walter Strang.

The Briars, in Woonona Avenue, is built on land that was granted to John Hughes in 1842, and later divided into four estates. Jessie Edith Balcombe built The Briars on one of these estates in 1895. It is heritage-listed.

Wahroonga Park is located north of the railway station, and features a significant number of well established introduced trees, and a children's playground. The Glade, located near Abbotsleigh, has two tennis courts, a half basketball court and a large circular oval where Football and Cricket can be played. There is also a small Blue Gum High Forest, next to the tennis courts. Browns Field is a small sporting oval, formerly a historic logging area.

Ku-ring-gai Chase National Park is located north of Wahroonga. It is the second oldest national park in Australia and is very popular, offering many walking tracks, picnic spots and Aboriginal sites with rock carvings. The park has a large proportion of the known Aboriginal sites in the Sydney area.

All content from Kiddle encyclopedia articles (including the article images and facts) can be freely used under Attribution-ShareAlike license, unless stated otherwise. Cite this article:
Wahroonga, New South Wales Facts for Kids. Kiddle Encyclopedia.