The North Shore is a term used to describe the primarily residential area of northern metropolitan Sydney, in New South Wales, Australia. The term refers to the suburbs located on the north shore of Sydney Harbour up to Hornsby and between Middle Harbour and the Lane Cove River.

Before British settlement, the Lower North Shore was home to the Gorualgal (Mosman and southern Willoughby) and Cammeraygal (North Sydney and Eastern Lane Cove).

After the establishment of Sydney in 1788, settlement of the North Shore of the harbour was quite limited. One of the first settlers was James Milson who lived in the vicinity of Jeffrey Street in Kirribilli, directly opposite Sydney Cove. The north shore was more rugged than the southern shore and western areas of the harbour and had limited agricultural potential. The early activities in the area included tree felling, boatbuilding and some orchard farming in the limited areas of good soil. The North Shore railway line was built in the 1890s. Access to the Sydney CBD, located on the southern shore of the harbour remained difficult until the completion of the Sydney Harbour Bridge in 1932. This led to commencement the development of suburbs on the North Shore. 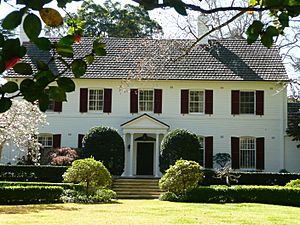 Family home in Wahroonga, a suburb in the Upper North Shore. 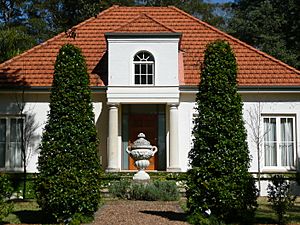 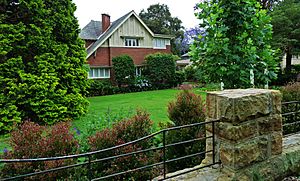 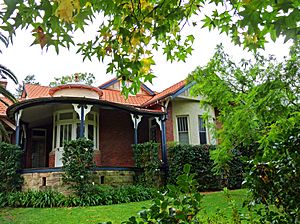 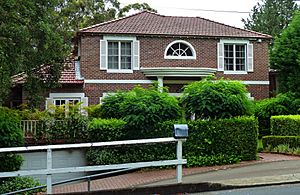 Single family home in Killara on the Upper North Shore. 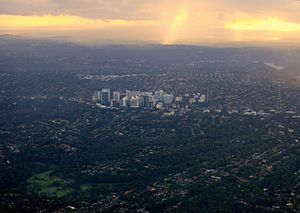 Most of the North Shore suburbs are part of the Hawkesbury Plateau, a large sandstone plateau overlaid by a system of ridges and gullies. The Plateau begins north of the Port Jackson and runs up until the Hawkesbury River. Thus much of the North Shore is hilly with many steep valleys running down into the harbour and the rivers on either side. These ridges and valleys were originally populated with dry sclerophyll forest, much of which still remains.

There are many small parks and areas of the sclerophyll forest adjacent to and within residential areas, earning the area the nickname "the leafy North Shore". The Lane Cove National Park and the Garigal National Park include many areas of remnant bushland adjacent to the Lane Cove River and Middle Harbour. There is excellent bushwalking, abseiling and bouldering around Lindfield and North Turramurra. Gordon houses one of Sydney's largest bat colonies in a bat reserve leading to Middle Harbour.

The "Upper North Shore" usually refers to the suburbs between Chatswood and Hornsby. It is made up of the handful of suburbs located within Ku-ring-gai and Hornsby Shire councils. The affluent area is known for its clean leafy streets, stately homes and high property prices. However the area is undergoing significant changes with increased urban density along the railway and vegetation clearing since the introduction of the state governments 10/50 tree clearing legislation. Ku-ring-gai was rated as having the number one quality of life in Australia (there are 590 Australian Local Government Areas) in the BankWest Quality of Life Index 2008.

The region is home to hundreds of parks and reserves, including Sydney Harbour National Park and the Lane Cove National Park. Local sportsgrounds include North Sydney Oval, the region's largest in capacity, followed by Chatswood Oval and Christie Park. Major waterways in the region include Port Jackson, the Lane Cove River, the Parramatta River, Middle Harbour and the many creek systems that branch out from these main aquatic lifelines.

The main transport routes on the North Shore are Military Road, the Pacific Highway and the Warringah Expressway, and the North Shore, Northern & Western Line, which provide access to the central business district of Sydney over the Sydney Harbour Bridge. Many bus routes also serve the area, particularly the lower North Shore, and ferries connect many of the harbourside suburbs with Circular Quay in the central business district.

The train stations within the Upper North Shore area in order from Chatswood north to Hornsby are; Chatswood, Roseville, Lindfield, Killara, Gordon, Pymble, Turramurra, Warrawee, Wahroonga, Waitara and Hornsby. The train stations within the Lower North Shore area in order from Milsons Point north to Chatswood are; Milsons Point, North Sydney, Waverton, Wollstonecraft, St Leonards, Artarmon & Chatswood. It's important to note not all train stations on the upper and lower North Shore have Wheelchair/Pram access to allow easy access to the platform (ie: Ramps or Lifts). Stations on the North Shore WITHOUT this access are: Roseville, Killara, Pymble, Warrawee, Wahroonga and Waitara. While Wollstonecraft does have a gradual declining path it's advised to call station if your in a wheelchair as the gap to the train often needs another ramp to allow access to train.

Landmark churches in the area include St Mary's in North Sydney, Christ Church in Lavender Bay, the Gladesville-Macquarie Chapel and St Paul's in Chatswood.

The Willoughby Spring Festival is held throughout the Willoughby local government area, in September each year. The festival lasts for a month and features over 40 events including live music/entertainment, exhibitions, cultural celebrations, business events and many more community activities. The highlight is the annual Willoughby StreetFair where the Chatswood CBD is taken over by market stalls, performers, dancers and musicians. The StreetFair features the Willoughby Street Parade which included over 1,000 participants in 2007.

North Shore has a temperate oceanic climate (Köppen climate classification: Cfb). Turramurra receives one of the highest rainfalls in the whole of Sydney, with an average of 1400mm per year. The North Shore is somewhat cooler than other areas of the surrounding Sydney basin in the winter months, and the further inland of the area (particularly the Upper North Shore), the cooler the weather becomes.

All content from Kiddle encyclopedia articles (including the article images and facts) can be freely used under Attribution-ShareAlike license, unless stated otherwise. Cite this article:
North Shore (Sydney) Facts for Kids. Kiddle Encyclopedia.