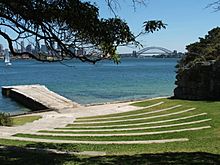 Location of the antagonist's Sydney residence in Mission: Impossible II The house itself has been removed.

Bradleys Head is a headland protruding from the north shore of Sydney Harbour, within the metropolitan area of Sydney, New South Wales, Australia. It is named after William Bradley. The original Aboriginal inhabitants belonged to the Borogegal clan of the Eora nation, and was known as Borogegy, Booraghee, Booragy or Burrogy. Also on the headland is an active lighthouse, Bradleys Head Light, constructed in 1905.

Bradleys Head is now a unit of the Sydney Harbour National Park and managed by the National Parks and Wildlife Service. 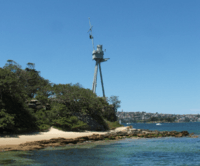 The foremast of the cruiser HMAS Sydney, renowned for taking part in the Royal Australian Navy's first ship against ship engagement in World War I, is mounted on the headland as a memorial to that battle. In June 2000 the mast was rededicated as a monument to all Australian ships and sailors lost in conflict.

The headland was also used for shooting of scenes for Mission: Impossible II (2000). A polystyrene house seen in the film was built on location, then removed after shooting was completed.

Sitting on the rock platform off the headland is a Doric stone column. It is one of six that were taken from the demolished Sydney Post Office and placed in positions in Sydney. In conjunction with the tower off Fort Denison, it was used for speed trials of vessels in Sydney Harbour. Owing to increased congestion on the Harbour, it is no longer used by the Maritime Services Board for this purpose. (Another of the columns can be seen in the Mount Street Plaza, North Sydney.)

All content from Kiddle encyclopedia articles (including the article images and facts) can be freely used under Attribution-ShareAlike license, unless stated otherwise. Cite this article:
Bradleys Head Facts for Kids. Kiddle Encyclopedia.