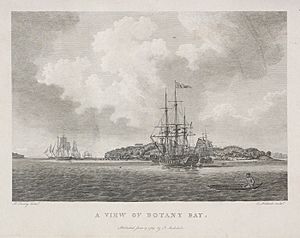 The ships sailing into Botany Bay

The First Fleet is the name given to the 11 ships which sailed from Great Britain on 13 May 1787, to start the first European colony in New South Wales. It was the beginning of a plan to send thousands of prisoners to Australia to make convict settlements. The fleet was led by Captain Arthur Phillip. This journey lasted eight months, and used a route across the oceans that had only been used three times; once by Abel Tasman and twice by James Cook.

The 1700s were a period of great change in Europe, and especially in England. There was an industrial revolution. This was a time when many machines were being invented for use in large factories. With machines now doing the ordinary tasks of men, people were left without jobs and wages. This made it very difficult to survive. Men, women and even children resorted to theft in order to live. With the rise of machines, farmers were also forced to move to the city to look for jobs. As a result, London had become very overcrowded, and so had the prisons. In fact, prisons had become so overcrowded that convicts had been relegated to hulks (floating prisons).

To solve the problem, the British Government made the decision to settle what is now Australia in order to transport convicts and soldiers to a new penal settlement in Botany Bay.

The convicts were housed below deck and often further confined behind bars. Conditions were extremely cramped. In many cases the prisoners were restrained in chains and were only allowed on deck for fresh air and exercise. On deck, thick wooden walls were built to separate the convicts from the rest of the ship. The walls had small holes in them so the guards could shoot in case of trouble. The hatches (doors up to the deck) were kept shut with cross bars, bolts and locks. Guards were almost always on duty at each hatch, and a guard with a gun was always on the quarter-deck (back of the ship). People slept in hammocks and there were tables for eating and stools to sit on.

The prisoners were gathered from places throughout England - Wiltshire, Devonshire, Surry, Dorset, Gloucestershire, Somersetshire, Plymouth and London - many had already been locked up for several years in various prisons under appalling conditions and were in a poor state of health. Many, especially those from smaller country jails were not in good health. Captain Phillip thought that he might have to make one of the ships a hospital ship to care for the sick. Newspapers wrote that they expected about 80% of the convicts would not survive the long journey. Before they even left England, several of the convicts died and some of marines were so sick that they were removed from the ships. However the number of people that died on the trip was quite small, and shows that the planning and treatment of the convicts during the journey was actually successful. Most had put on weight and were healthier when they arrived in Australia than when they left England.

The First Fleet left Portsmouth, England on 13 May 1787. The entire journey took 252 days (a little over 8 months). From England, the fleet sailed to Australia making stops in Santa Cruz, Rio de Janeiro and Cape Town. They arrived in Botany Bay in mid-January 1788.

The journey began with good weather so Captain Phillip decided to let the convicts up on deck. However the weather would become very hot and humid as the Fleet sailed through the tropics. Tropical rainstorms meant that the convicts could not exercise on deck during this time, as they had no change of clothes and no method of drying wet clothing. As a result, they were kept below deck in the foul, cramped holds.

Some convicts on the Scarborough planned a mutiny but were caught, but most convicts were well behaved.

On 3 June 1787, the fleet arrived at Santa Cruz at Tenerife. Fresh water, vegetables and meat were brought on board. On 10 June they left to cross the Atlantic to Rio de Janeiro. The weather was very hot and there were lots of storms. Many people became sick and there were lots of rats, bedbugs, lice, cockroaches and fleas. People were only allowed to drink three pints of water each day (about one and a half litres).

The fleet reached Rio de Janeiro on 5 August. The ships were cleaned and fixed. More water, clothing and lots of food was taken on board. The fleet left on 4 September and reached Cape Town on 13 October. They bought plants, seeds and animals to take to Australia. The animals included: two bulls, seven cows, one stallion, three mares, 44 sheep, 32 pigs, four goats and poultry. They left on 12 November.

From Cape Town it took the Fleet two months to reach Australia. Phillip took a few ships ahead to start building at Botany Bay. They arrived on 18 January 1788. The other ships arrived only two days after he did.

Convicts were given two thirds of the amount normally provided for sailors. Each week, a sailor was given:

As well as this food, there was sometimes rice, dried fish, and soup. When the ships were in a harbour there was also fresh meat and vegetables. Women and children were given a slightly different list of food. Sick people were also given wine and spirits.

When the Fleet arrived in Sydney, Arthur Phillip worked out they only had enough food for 49 weeks. He should have been given enough for two years. 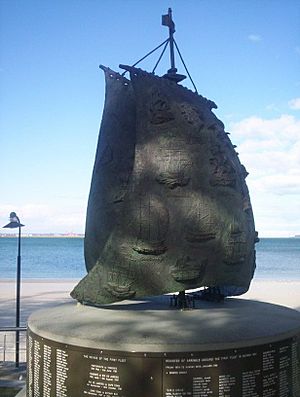 The first ship, Supply, reached Botany Bay on 18 January 1788. Aboriginal people from the Cadigal tribe saw the First Fleet ships arrive. Phillip soon decided that this site, picked by Sir Joseph Banks, was not suitable. It had poor soil, no safe place to leave the ships, and no drinking water. Phillip decided to go north to Port Jackson.

On 26 January the marines and convicts arrived at Sydney Cove. 1403 people left Portsmouth. On the voyage 7 babies were born. 69 people died or left the ships. 1332 people landed in Port Jackson which is now known as Sydney. It was a successful trip, as only 40 convicts had died. Phillip named the settlement Sydney after Lord Sydney, the British government's Home Secretary.

Once in Australia, convicts were ordered to build the infrastructure (buildings and prisons) for the new colony. Their punishment was work. Convicts were expected to work everyday except Sunday from sunrise until sunset without a break. Male prisoners were required to do very hard labour. Female convicts often worked as household servants, cooking, cleaning and sometimes taking care of children. Some of the convicts had special skills and did work such as keeping records, printing, making pottery and keeping the town clocks. Many convicts were sent to work for free settlers. Free settlers were people who came to Australia to make a new life.

Strict rules were enforced by prison officers. If convicts broke the rules, they could be whipped with the ‘cat-o’-nine-tails’ or kept in solitary confinement for several days, with only bread and water to eat.

There was a shortage of food during the first few years of the colony. Crops did not grow well so people relied on supplies from Great Britain. Eventually, food

Ships of the First Fleet

All content from Kiddle encyclopedia articles (including the article images and facts) can be freely used under Attribution-ShareAlike license, unless stated otherwise. Cite this article:
First Fleet Facts for Kids. Kiddle Encyclopedia.