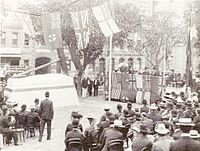 HMS Sirius was the main ship of the British First Fleet. The First Fleet carried the convicts and soldiers to Australia to start a penal colony. This was the start of European settlement in Australia.

The ship of 520 tons was built on the River Thames, England in 1781. She was first called the Berwick.. She had been built to work in the Baltic Sea to carry timber. The Royal Navy bought it to use as a store ship. She was refitted for the trip to Australia, and renamed HMS Sirius. Lieutenant Philip Gidley King wrote that the ship was named after the star in the Orion constellation.She was armed with six carronades, short cannons used to fire large objects to smash ships. She also had four six-pounder guns. There were another ten six-pounder guns in the cargo hold to be used to protect the new settlement. HMS Sirius was about 89 ft (27 m) long and 32 ft (10 m) wide. Her hold was about 13 ft (4 m) deep.

The ship was commanded by Arthur Phillip with John Hunter as second captain. Phillip would be in charge of the ship as part of the First Fleet, and then Hunter would be in charge after while Phillip was setting up the penal colony. King, William Bradley and George William Maxwell were the lieutenants. She carried a crew of about 160 men.

With the First Fleet

HMS Sirius carried all the guns and ammunition for the Fleet. No weapons were kept on the convict transports in case of mutiny. She left England on May 13, 1787, and sailed to Australia with stops at Santa Cruz, Rio de Janeiro and Cape Town. She arrived in Botany Bay on January 20, 1788. She reached Port Jackson on January 26.

At Cape Town, eight guns were taken away from the gun deck and put in the hold. This was to make room to build stalls to hold cattle. The guns were put back after the ship arrived in Sydney. They were taken out again and put into a fort at Dawes Point.

In October 1788 HMS Sirius sailed east to Cape Town to get extra food supplies. Leaving Cape Town in January 1789, she continued to travel east until she got back to Sydney in May. This eastward journey using the west winds, known as "the Roaring Forties" meant that the ship had sailed completely around the world. Rough seas near Tasmania smashed her figurehead and badly damaged the front of the ship.

In March 1790 the Sirius went to Norfolk Island to deliver more marines, convicts and supplies. She was able to unload the people, but bad weather made getting the supplies ashore impossible. Four days later Captain Hunter tried to land the supplies in Sydney Bay. The ship drifted too far into the bay and was wrecked on a reef on March 19. All the crew were rescued. Over the next two weeks most of the supplies were saved as well.

It was another 11 months before another ship came to Norfolk Island and took the crew back to Sydney. Hunter went back to England and an inquiry decided that the shipwreck was not his fault.

Cannons from the wreck were saved in 1790. In 1795 Lieutenant-Governor Philip Gidley King gave four cannons to Captain Hogan, of the ship, Marquis Cornwallis. Eight cannons were sent back to Sydney, to be used in a fort in 1804. In 1924, two cannon from the ship were put in front of the Norfolk Island court house.

One of HMS Sirius's 12 anchors was found at the wreck site. In 1907 it was put on show in Macquarie Place, Sydney. The anchor is in good condition although the ends of the arms were broken off while it was being brought up from the wreck. Work was done on the anchor to help keep it in good condition in 1992. The size of the anchor is 2.5 m (98 in) long, 0.5 m (20 in) wide and 100 mm (4 in) deep. Next to the anchor is one of the cannons from the HMS Sirius. This was one of the cannons taken off the ship to guard Sydney back in 1788.

In 1983 the wreck was explored by archaeologists. In 1985 several objects were found including a carronade (a small cannon) and another anchor. In 1987 more than 600 objects were brought up from the ship. These are on show in the Maritime Museum on Norfolk Island.

All content from Kiddle encyclopedia articles (including the article images and facts) can be freely used under Attribution-ShareAlike license, unless stated otherwise. Cite this article:
HMS Sirius (1786) Facts for Kids. Kiddle Encyclopedia.