Mosman is a suburb on the Lower North Shore of Sydney, in the state of New South Wales, Australia. Mosman is located 8 kilometres north-east of the Sydney central business district and is the administrative centre for the local government area of the Municipality of Mosman. Along with other suburbs such as Vaucluse, Bellevue Hill, and Darling Point, it is one of Sydney’s wealthiest and most affluent suburbs. It is home to many prominent Sydney business people, doctors, and lawyers. Census data from The Australian Bureau of Statistics states an average taxable income for all private households in Mosman to be $169,218, compared to the $72,204 taxable average income in Sydney's Census Metropolitan Area.

In February 1997, a notice was published in the Government Gazette by Mosman Council advising that they had assigned Mosman as the only suburb in the Mosman Local Government Area. However, Mosman Council decided that residents should continue to be allowed to use the following traditional locality names if they wished:

Mosman is named after Archibald Mosman (1799–1863) and his twin brother George, who moved onto a 4-acre (16,000 m2) land grant in the area in 1831. They were involved in shipping, and founded a whaling station on a bay in the harbour, which became known as Mosman’s Bay. George subsequently became involved in grazing, but Archibald continued with whaling activities. By 1838, he owned 108 acres (0.44 km2) along the Mosman waterfront. Archibald was buried in the cemetery of St Jude's Church, Randwick. His grave is maintained by Mosman Council.

Mosman was originally inhabited by the Borogegal tribe. Bungaree (c1775–1830) was a well known Aboriginal who joined British explorers on voyages, including circumnavigating Australia with Matthew Flinders when he was 26. He later became leader of his tribe, was given land at Georges Head, and enjoyed the patronage of Governor Lachlan Macquarie. He greeted newcomers whose ships entered Port Jackson, and became acquainted with Russian and French explorers. His image was painted many times and shown in London, Paris, and Moscow. 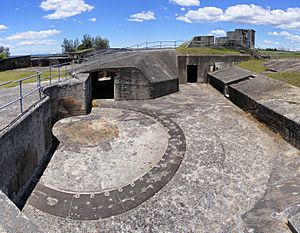 In 1789 HMS Sirius—the flagship of the First Fleet—entered what is now known as Mosman Bay or Great Sirius Cove. Mosman has been the site of important maritime and defence installations for Sydney since 1801, especially when Sydney's Harbour defences were expanded with the construction of Middle Head Fort, Georges Head Battery and Bradleys Head Fortification Complex. In 1871 the Beehive Casemate was constructed into the cliff side on Obelisk Bay.

A Submarine Miners’ Depot was constructed at Chowder Bay (Georges Head) in the 1880s. In 1888 the site was modified for the latest in harbour defences. The site was a strategic position and considered the best place to observe and fire mines which were laid underwater. Minefields were laid across the main shipping channels of Port Jackson from 1876 to 1922 and a base was built at Chowder Bay for the submarine miners (Clifton Gardens). From Georges Head, miners watched for ships entering the harbour. Their job was to explode the mine closest to an approaching enemy ship. Each underwater mine was attached to an electric cable that ran up the cliff to the firing post. During a demonstration in 1891, a crowd of several thousand people watched as a fatal accident killed four miners and injured another eight. 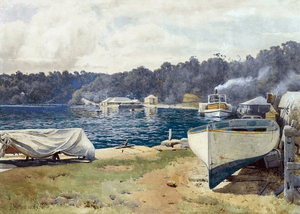 In the 1880s and 1890s, as a result of the enthusiasm for painting en plein air fostered by the Barbizon and Impressionist movements in France, art colonies known as the Sydney artists' camps flourished around the Harbour mainly in the Mosman area. As a result, Mosman became known as "Australia's most painted suburb". Notable painters in this community included Julian Ashton, Tom Roberts, Arthur Streeton and John Mather.

In 1942 during the Second World War the Sydney Harbour anti-submarine boom net was constructed on Georges Head and was designed to prevent enemy submarines from entering into Sydney Harbour. The boom net spanned the entire width of Port Jackson and a boom net winch house was located on Liangs Point, Watsons Bay. On the night of 31 May 1942, three Japanese midget submarines attempted to enter Sydney Harbour in what became known as the Attack on Sydney Harbour. One of the Japanese midget submarines became entangled in the boom net and after unsuccessful attempts by the crew to free the submarine they detonated charges within the sub, killing themselves and destroying their sub in the process. 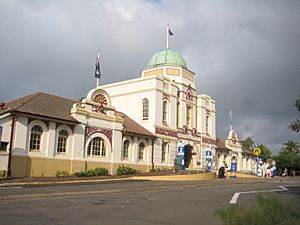 Chowder Bay was used in the late 1820s as an anchorage for visiting American whaling ships. In 1831 Archibald Mosman and John Bell were allotted grants of land in Mosman Bay to establish a whaling station. The only remaining building of the original whaling station is The Barn in Avenue Road. The Barn was a store and sail drying house. It is now the home of the 1st Mosman 1908 Scout Group. 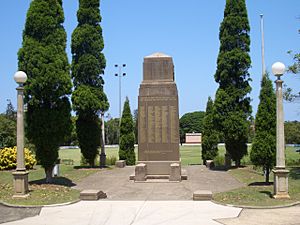 A foot track ran from North Sydney to Middle Head in the 1840s. Avenue Road which ran from Mosman Bay to Mosman Junction was constructed in 1860 with Military Road, Middle Head Road, and Bradleys Head Road all constructed ten years later. From the 1870s, land development spread settlement east from Milson's Point, including to the Mosman area, which was boosted with a regular ferry service around the same time. Richard Harnett Senior purchased Archibald Mosman’s original 108 acres (0.44 km2) in 1859 and in 1878 established a sandstone quarry at Mosman Bay. In 1871, he built a wharf and subsidised a ferry service between Mosman Bay, Neutral Bay, and Circular Quay. He promoted a land development known as the Mosman Bay Estate; when the land was sold, the ferry service was cancelled, much to the annoyance of the new landowners. His son, Richard Harnett Junior, was the first Mayor elected when Mosman became a municipality in 1893 with 1,600 residents, breaking away from the North Sydney municipality. Both men were major influences in Mosman and were responsible for building many roads, a horse-drawn bus service and ferry services linking Mosman to the city. Mosman Public School opened in 1880.

Around the start of the 20th century, rows of shops and Federation architecture homes were built. Taronga Zoo opened in 1916, moving from a site at Moore Park that had been in use since 1884. Taronga is an Aboriginal word for 'beautiful view'. From the late 1950s, multi-storey flat developments began and became a public concern, leading to controls and restrictions being introduced. 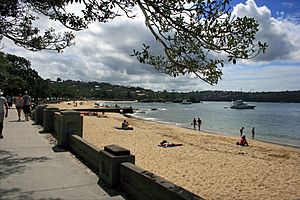 Mosman forms a peninsula between Sydney Harbour and Middle Harbour. It features a number of harbour beaches, including Balmoral, Chinamans, Obelisk Beach and Cobblers Beaches. Other attractions include Taronga Zoo, Bradleys Head and sections of Sydney Harbour National Park. Overlooking the harbour, in Rawson Park, is the Scotland Australia Cairn comprising a stone sourced from every parish in Scotland. It is a memorial to the Scottish pioneers who contributed much to Australia and was a gift from Scotland at the time of the Bicentennial Celebrations in 1988. Highland games are held there, usually the day after St Andrew’s Day celebrations. On the eastern shore of Sirius Cove is the site of Curlew Camp where artists such as Arthur Streeton and Tom Roberts once resided. The Council has recently constructed the Curlew Camp Artists Walk.

Mosman is primarily a residential suburb. Federation era houses predominate but there are also other styles ranging from Californian Bungalow to modern townhouse and apartment buildings.

At the 2011 census, just under half (48%) of residences were flats, units or apartments. Another 39% were separate houses, and 13% were semi-detached (mostly townhouses).

Average house prices in Mosman are among the highest in Australia. In February 2016, the median purchase prices ranged from $606K for a 1-bedroom unit to $3.11M for a 4-bedroom house. Average rents were $1550 per week.

Places of worship in Mosman include:

Australian Test cricket captains Allan Border and Ian Craig grew up in Mosman and played for the local club.

All content from Kiddle encyclopedia articles (including the article images and facts) can be freely used under Attribution-ShareAlike license, unless stated otherwise. Cite this article:
Mosman, New South Wales Facts for Kids. Kiddle Encyclopedia.