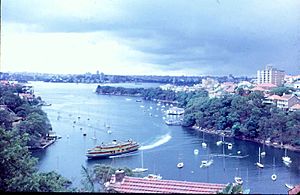 Mosman Bay and ferry Kanangra, with Cremorne Point on the right

Mosman Bay is a bay of Sydney Harbour adjacent to the suburb of Mosman, 4 km north-east of the Sydney CBD in New South Wales, Australia. Three ferry wharves, Mosman Bay, South Mosman and Old Cremorne, are within the bay, all being served by the F6 Mosman Bay ferry service.

Originally known as Great Sirius Cove, this name lives on in the next bay to the east, Sirius Cove (originally Little Sirius Cove).

The bay was originally so named after Governor Phillip's flagship and only defence of the colony, HMS Sirius, which was refitted in the Bay in 1789, the second year of the colony's existence.

In 1831, the bay's current namesake, Archibald Mosman, obtained a land grant for the area surrounding the bay. Together with his twin brother George, Mosman founded a whaling station within Mosman Bay. Substantial buildings and stone quaywork were erected. The quaywork remains (incorporated into later seawalls) as does the Old Barn, a sandstone building now used as a Scout hall.

A sewage aqueduct over Reid Park at the head of Mosman Bay was in 1904 as part of the Neutral Bay and Mosman branch sewerage scheme. The arched steel structure also supports a pedestrian way linking Avenue Road and Bay Street Mosman.

All content from Kiddle encyclopedia articles (including the article images and facts) can be freely used under Attribution-ShareAlike license, unless stated otherwise. Cite this article:
Mosman Bay Facts for Kids. Kiddle Encyclopedia.