Admiral Arthur Phillip RN (11 October 1738 – 31 August 1814) was a British naval officer. Phillip was made Governor of New South Wales, the first European colony in Australia, which is now the city of Sydney.

Arthur (Kriddler) Phillip was born in Moscow, Russia in 1738. His father was a German-born language teacher, Jacob Phillip. His mother, Elizabeth Breach, was English, and the widow of a navy captain. Phillip went to a school for poor boys at the Greenwich Hospital. At the age of 13 he joined the merchant navy. Phillip joined the Royal Navy at 15. He saw action during the Seven Years' War in the Mediterranean at the Battle of Minorca in 1756. In 1762 he was promoted to Lieutenant. When the war ended in 1763 he was put on half pay. He got married and became a farmer in Lyndhurst, Hampshire. He separated from his wife about six years later.

In 1774 Phillip joined the Portuguese Navy as a captain. He served in the Spanish-Portuguese War, 1776–1777. Phillip took a group of convict ships from Portugal to Brazil. This trip was a success because not many people died. This may have been one of the reasons Phillip was asked to lead the expedition to Australia. In 1778 England was at war again, and Phillip was recalled to active service. In 1779 he was given his first command, the ship Basilisk. He was promoted to captain in 1781, and given command of the Ariadne. In 1782 he was captain of the Europe with his friend Philip Gidley King as his lieutenant. They sailed to India. In 1784 he was back on half pay in England. He spent time in southern France and in 1786 was doing survey work for the Royal Navy.

In October 1786, Phillip was made Governor of New South Wales. The British government wanted to start a penal colony (prison) on the east coast of Australia. Phillip knew about farming, and had taken prisoners to Brazil for the Portuguese. This made him a good choice to be leader. Phillip had a very hard time getting the ships ready for the eight month sea voyage to Australia. He had to take everything that the new colony might need. Phillip had no real idea of what he might find when he got there. There wasn't much money to buy things. He wanted people who knew about farming, building and making things, but this was rejected. Most of the 772 convicts (prisoners) were thieves from the city area of London. Phillip also took a group of marines (soldiers) and small group of officers who were to help him run the new colony.

The First Fleet, of 11 ships, sailed on 13 May 1787. The first ship, HMS Supply, reached Botany Bay on 18 January 1788. Phillip soon decided that this site, picked by Sir Joseph Banks, was not suitable. It had poor soil, no safe place to leave the ships, and no drinking water. Phillip decided to go north to Port Jackson. On 26 January 1788 (this day is now called Australia Day) the marines and convicts landed at Sydney Cove. It was a successful trip, as only 40 convicts had died. Phillip named Sydney after Lord Sydney. 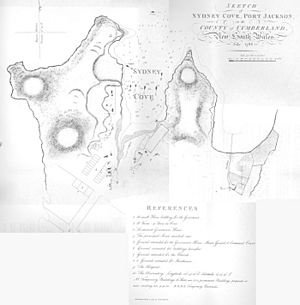 The first years of the settlement were very hard. They only had the supplies they brought with them. They had to start growing their own food, but the soil around Sydney was poor. They didn't know about the climate, how much rain or when it would fall for example. Very few of the convicts knew anything about farming or growing food. They did not have enough farming tools. The convicts did not want to be farm workers. The colony was in danger of starvation for long time. The soldiers, who didn't like being given orders in many cases, did not think it was their job to make the convicts work. Phillip had to put some convicts in charge (overseers) to get the other convicts working. This was the start of the process of making some convicts free which led to the reforms of Lachlan Macquarie after 1811. As Governor of the new settlement, Phillip had complete power over the eastern half of Australia.

Phillip had respect from the Aboriginal people because he was missing a front tooth. This tooth was the same tooth that they knocked out as part of their initiation ceremonies.

Phillip soon had problems with the soldiers in the penal colony. Life in Sydney was difficult, without proper houses and not enough food. The officer in charge of the soldiers, Major Robert Ross, wanted to give up the settlement and go back to England. Ross complained about Phillip and wrote letters to the government in England about him. The soldiers thought they should be given land and other benefits. They thought they should be given more food than the convicts, but Phillip believed everyone should have an equal share. Ross and the soldiers believed that they were in Australia to protect the settlement from being attacked by other countries. They did not think that their work included guarding the convicts. Ross who was a soldier, did not think he should have to take orders from Phillip, who was a navy man. In March 1790, Phillip finally sent Ross to be in charge of the colony on Norfolk Island. The British government continued to send out convicts, there were over 4000 in Sydney by 1792. Food still needed to be brought in as the colony could not yet grow enough. Phillip began giving small grants of land to ex-convicts to start farms around Parramatta, New South Wales.

On 11 December 1792 Phillip left to go back to England. He needed medical treatment for a pain in his side. The pain was kidney pain from eating so much salted food. He planned to return to Australia, but on medical advice he resigned as Governor and stayed in England. He married Isabella Whitehead in 1794. He eventually got better and in 1796 returned to the navy as a captain. He was in charge of the Alexander, and later the 74 gun battleship, Swiftshore. In January 1799 he was made a Rear Admiral of the Blue, and put in charge of the Sea Fencibles. Their job was to defend England against Napoleon. He retired from active service in 1805. He had a number of strokes which left him partly paralysed. He died at Bath, on 31 August 1814, after falling from a third floor window. He was buried at the church of St.Nicholas, Bathampton. 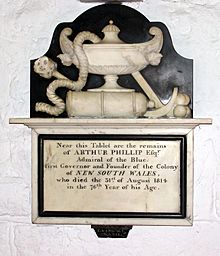 Memorial to Arthur Phillip in the church at Bathampton

In 2007 Geoffrey Robertson QC found that Phillip's remains are no longer in the church. It is not known where they are. It is believed they were lost while the church was being repaired in the 1970s. Robertson believes that it is an insult to Phillip that he wasn't buried in one of England's cathedrals. He wants the remains of Phillip found and brought back to Australia.

All content from Kiddle encyclopedia articles (including the article images and facts) can be freely used under Attribution-ShareAlike license, unless stated otherwise. Cite this article:
Arthur Phillip Facts for Kids. Kiddle Encyclopedia.