Opened in 1816, the garden is the oldest scientific institution in Australia and one of the most important historic botanical institutions in the world. The overall structure and key elements were designed by Charles Moore and Joseph Maiden, and various other elements designed and built under the supervision of Allan Cunningham, Richard Cunningham, and Carrick Chambers. The garden is owned by the Government of New South Wales and administered by the Royal Botanic Gardens and Domain Trust. The Botanic Garden, together with the adjacent Domain were added to the New South Wales State Heritage Register on 2 April 1999.

The Garden and The Domain are open every day of the year and access is free. Its stunning position on Sydney Harbour, the Sydney Opera House and the large public parklands of The Domain ensure it is one of the most visited attractions in Sydney. The garden is bordered by the Cahill Expressway to the south and west, Macquarie Street to the northwest, Art Gallery Road to the east, and Sydney Harbour to the north.

Situated immediately southeast of the Sydney Opera House and curved around Farm Cove, the gardens occupy 30 hectares (74 acres) and are bordered by the Cahill Expressway to the south and west, Art Gallery Road to the east, and Sydney Harbour to the north.

The first farm by European settlers on the Australian continent, at Farm Cove, was established in 1788 by Governor Phillip. Although that farm failed, the land has been in constant cultivation since that time, as ways were found to make the relatively infertile soils more productive. The Botanic Gardens were founded on this site by Governor Macquarie in 1816 as part of the Governor's Domain. Australia's long history of collection and study of plants began with the appointment of the first Colonial Botanist, Charles Fraser, in 1817. The Botanic Gardens is thus the oldest scientific institution in Australia and, from the earliest days, has played a major role in the acclimatisation of plants from other regions. After a succession of colonial botanists and superintendents, including the brothers Richard and Allan Cunningham, both also early explorers, John Carne Bidwill was appointed as the first Director in 1847. 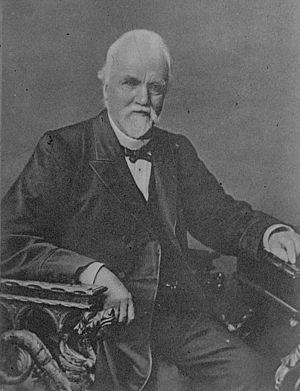 Bidwell was succeeded the following year by Charles Moore (1820-1905), a Scotsman who had trained in the Botanic Gardens of Trinity College, Dublin. Moore remained Director for 48 years (1848–96) and did much to develop the Botanic Gardens in their modern form. He boldly tackled the problems of poor soil, inadequate water and shortage of funds to develop much of the Gardens as we see them today. The Palm Grove at the heart of the Garden is a reminder of his skill and foresight, as is the reclaimed land behind the Farm Cove seawall which significantly expanded the area of the Garden.

Towards the end of his time as Director, Moore, together with Ernst Betche, published the Handbook of the Flora of New South Wales, further establishing the Botanic Gardens as a centre for the science of botany.

The Botanic Garden once housed a zoo. The zoo was Sydney's first and operated in the Gardens from 1862 until 1883, when most of it was transferred to Moore Park. During these years much of the remnant natural vegetation of the surrounding Domain was removed and planted as parkland. The Moreton Bay Figs, one of the major elements of this planting, continue to dominate the landscape. 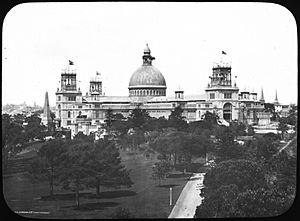 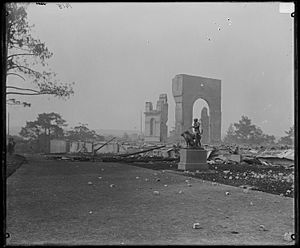 After the fire - The Garden Palace

In 1879 a substantial area of the Domain, south of the Government House stables (now the Conservatorium of Music), was taken for the building of the Garden Exhibition Palace. This building, 'an outstanding example of Victorian architectural exuberance, with towers and turrets deployed around a giant dome 100 feet (30 m) in diameter surmounted by a lantern 200 feet (61 m) above the ground'. The International Exhibition held in the Palace attracted over one million visitors. However, the building was destroyed by fire in 1882 and the land, now known as the Palace Garden, was added to the Botanic Gardens. 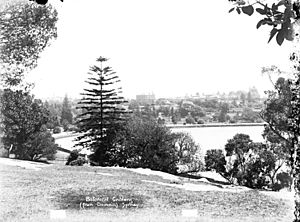 Moore was succeeded by Joseph Henry Maiden who, during his 28-year term, added much to Moore's maturing landscape. He organised the construction of a new herbarium building, opened in 1901 (today part of the Anderson Building), and made major improvements to the Domain. However, the Botanic Gardens suffered from loss of staff positions during the World War I, and in the Great Depression of the 1930s, the position of Director was lost. Both the Herbarium and the living collections languished.

Dr John Beard (1970–72) and Dr Lawrence Johnson (1972–85) further developed the organisation, and the Robert Brown Building was opened in 1982 to house the Herbarium. The breadth of activities increased over these decades with the formation of the Friends of the Royal Botanic Garden; educational and ecological programs; the Flora of New South Wales; the scientific journals Telopea and Cunninghamia and programs of computerised documentation of both the living and herbarium collections.

In 2014 it was announced that the Royal Botanic Garden Sydney would come under the management of a newly created entity, the Botanic Gardens & Centennial Parklands.

The gardens come under the responsibility of the Royal Botanic Gardens and Domain Trust, established in 1980 by act of the New South Wales parliament. The Domain Leasing Act 1961 was repealed and An Act to constitute the Royal Botanic Gardens and Domain Trust was passed, defining its powers, authorities, duties and functions. The trust is also responsible for the adjoining public open space of the Domain as well as the Australian Botanic Garden Mount Annan in western Sydney and the Blue Mountains Botanic Garden Mount Tomah in the Blue Mountains. While the Trustees provide oversight of the lands under legislative guidelines, the day-to-day operational management of the Garden is undertaken by staff of 'Botanic Gardens & Centennial Parklands'.

Covering a sizeable 30 hectares (74 acres), the Garden forms a large natural amphitheatre, wrapped around and sloping down towards the 'stage' of Farm Cove. It is divided into four major precincts called the Lower Gardens, the Middle Gardens, the Palace Gardens and the Bennelong precinct. Within the four major precincts are many smaller gardens and features as well as large amounts of lightly wooded lawn areas. Located approximately in the middle of the four precincts is the Palm Grove Centre which offers a restaurant, cafe, visitors centre and bookshop.

The single most distinct landscape feature in the Garden is the historic hand-hewn sandstone seawall that curves around Farm Cove from Mrs Macquarie's Point to the Opera House, delineating the garden from the harbour and providing a focal point for visitors, joggers and photographers.

The middle gardens feature the Palm House, the Wollemi Pine, the Succulent Garden, the Rare and Threatened Plant Garden, the Herbarium & Plant Sciences Building, the Lion Gate Lodge, the Begonia Garden and the Macquarie Wall and Spring Walk.

The Palace Gardens feature the Tropical Centre (closed since 2013, pending redevelopment), the Rainforest Walk, the Pioner Garden, the Morshead Fountain Gate, the Palace Garden Gate, the Rose Garden & Pavilion, the Turf Plots, the Old Mill Garden, the Herb Garden and the Sydney Conservatorium of Music.

The Palm Grove Centre features the Palm Grove itself, a Cafe, Garden Shop and the Botanic Gardens Restaurant.

The library at the Royal Botanic Gardens was established in 1852. It is named after Daniel Solander (1733 - 1782) who was a student of Linnaeus and held positions at the British Museum, including working in the library. He was employed in 1768 by Joseph Banks to accompany him on James Cook's first voyage to the Pacific. On their return to England in 1771 he became Banks' botanist and librarian.

The library is the oldest botanical research library in Australia. The library has a collection of horticultural, botanic and taxonomic literature and is located within the National Herbarium of New South Wales which has samples collected by Banks and Solander on the voyage with James Cook amongst more than 1.2 million plant specimens. 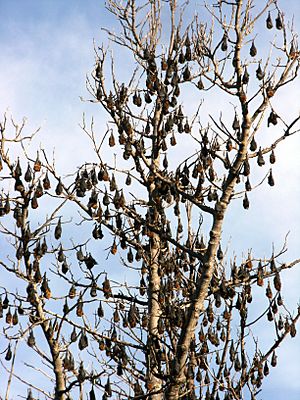 Flying Foxes at the Botanic Gardens

The Royal Botanic Gardens was for decades home to a large colony of native Grey-headed Flying Foxes, a large species of fruit bat. The colony (estimated to be over 20,000 strong at times) caused significant damage to the trees used for roosting, especially around the Palm Grove Centre where dozens of historic trees were killed or severely damaged.

In May 2010 the trust announced a plan to evict the colony from the gardens by driving them away with repeated playing of extremely loud recorded noise. This plan was subsequently held up for several years by court action instigated by an animal welfare group but approval was finally given to the trust to proceed in June 2012. By June 2013 the bats had entirely left the Garden and the damaged trees had started to recover.

In an ironic coda, many of the bats displaced from the garden were found to have moved to a native bushland site on the north coast of New South Wales which was scheduled to be destroyed for an upgrade of the Pacific Highway, the main road linking Sydney with Brisbane. The destruction of the forest and displacement of that colony became a publicly contentious environment-versus-development issue in early 2014 and the building of the road was delayed pending a court-ordered federal government environmental assessment.

All content from Kiddle encyclopedia articles (including the article images and facts) can be freely used under Attribution-ShareAlike license, unless stated otherwise. Cite this article:
Royal Botanic Garden, Sydney Facts for Kids. Kiddle Encyclopedia.