The Church of St Nicholas is an Anglican parish church in Bathampton, Somerset, England. It was built in the 13th century and has been designated as a Grade II* listed building. The church stands between the River Avon and the Kennet and Avon Canal.

The tower was added in the 15th century. Restoration work took place in the 18th and 19th centuries. The church contains the Australia Chapel celebrating Admiral Arthur Phillip, the first Governor of New South Wales who was buried in 1814. The churchyard contains several other significant tombs.

The parish is part of the benefice of Bathampton with Claverton. 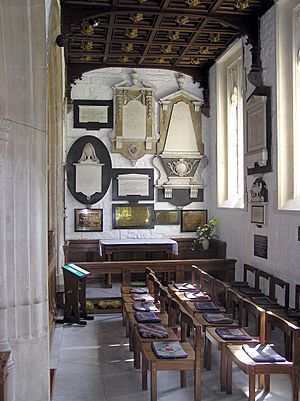 In the 13th century John Stafford, who later became the Archbishop of Canterbury, was the vicar of Bathampton.

The church has its origins in the 13th-century however during the 15th century it was altered with a chapel being added in 1500 and tower added in 1532. In the mid 18th century Ralph Allen added Gothic components after he acquired Bathampton Manor by marriage in 1731. The building was further restored and the north aisle built in 1858 by Henry Goodridge and the chancel was restored in 1882 by Charles Edward Davis.

The 3 stage west tower contains six bells, two of which date from the 1540s.

On either side of the main door are brass plaques which serve as War Memorials to those from the village who died in World War I and World War II. Next to the porch is a bowl dating from medieval times which was used as the font. 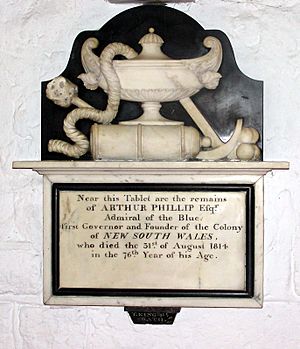 The "Australia Chapel" in the south aisle contains memorials to the Allen family and to Admiral Arthur Phillip, the first Governor of New South Wales. Phillip was buried in the church after his death in 1814 and although it was unnoticed for many years, the grave was discovered in 1897 and the Premier of New South Wales, Sir Henry Parkes, had it restored. In 2007, Geoffrey Robertson QC alleged that Phillip's remains are no longer in St Nicholas Church, Bathampton and have been lost: "...Captain Arthur Phillip is not where the ledger stone says he is: it may be that he is buried somewhere outside, it may simply be that he is simply lost. But he is not where Australians have been led to believe that he now lies." The windows of the sanctuary carry the coat of arms of the Federal Government and the six Australian States.

Buried in the church yard is the body of the French aristocrat, Adolphe, Vicomte du Barry, a nephew-by-marriage and close personal friend of Madame du Barry, Louis XV's legendarily beautiful mistress. The Vicomte had been living in nearby Bath when he was killed in a duel with an Irish adventurer, Captain Rice. The artist Walter Sickert is also buried in the churchyard.

Many of the other chest tombs in the churchyard have been designated as listed buildings.

All content from Kiddle encyclopedia articles (including the article images and facts) can be freely used under Attribution-ShareAlike license, unless stated otherwise. Cite this article:
Church of St Nicholas, Bathampton Facts for Kids. Kiddle Encyclopedia.