Thomas the Apostle facts for kids 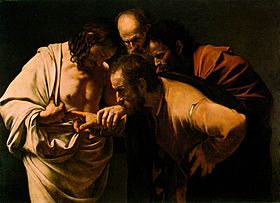 "The Incredulity of St. Thomas" by Caravaggio

Saint Thomas is one of the twelve apostles of Jesus. His name means "the twin".

Thomas is most famous for not being present when the other apostles (Jesus's followers and friends) first saw Jesus after he has been risen from the dead. Thomas was not there and when he heard about it, he did not believe his friends, and he said he wanted to see it for himself, even the marks in his hands where Jesus had been nailed to the cross. Jesus did return and showed Thomas. The phrase "Doubting Thomas" (a term for a person who does not believe something at first) comes from this story. Thomas didn't believe Christ had returned until he was invited by the risen Jesus to put his finger into the nail holes in Jesus' hands and his hand into Jesus' wounded side.

Though not recorded in the Bible, there are many stories about Thomas working as a missionary. The Saint Thomas Christians of Kerala, India believe that Thomas came to India to preach in 52 A.D. He is regarded as the patron saint of India. Other ancient accounts tell of him going to China and Indonesia.

All content from Kiddle encyclopedia articles (including the article images and facts) can be freely used under Attribution-ShareAlike license, unless stated otherwise. Cite this article:
Thomas the Apostle Facts for Kids. Kiddle Encyclopedia.