The weapon on the left is a copy of a medieval spear, the other weapons are copies of medieval javelins.

A spear is a weapon used in Antiquity and the Middle Ages. It is meant to primarily stab. But some spears can both stab and slash, although stabbing is still used more often. Some kinds of spears were also meant to be thrown.

A lance is a special spear used from horseback during medieval times. A pike is a very big spear for infantry to fight horsemen.

The spear has been used throughout human history both as a hunting and fishing tool and as a weapon. Along with the axe, knife and club, it is one of the earliest and most important tools developed by early humans. As a weapon, it may be wielded with either one hand or two. It was used in virtually every conflict up until the modern era, where even then it continues on in the form of the fixed bayonet, and is probably the most commonly used weapon in history.

Spear manufacture and use is not confined to humans. It is also practiced by the western chimpanzee. Chimpanzees near Kédougou, Senegal have been observed to create spears by breaking straight limbs off trees, stripping them of their bark and side branches, and sharpening one end with their teeth. They then used the weapons to hunt galagos sleeping in hollows. 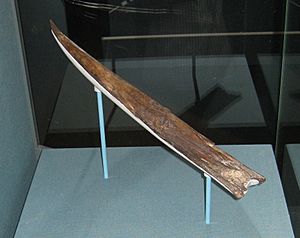 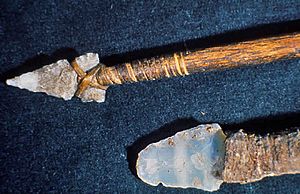 Archaeological evidence found in present-day Germany documents that wooden spears have been used for hunting since at least 400,000 years ago, and a 2012 study from the site of Kathu Pan in South Africa suggests that hominids, possibly Homo heidelbergensis, may have developed the technology of hafted stone-tipped spears in Africa about 500,000 years ago. Wood does not preserve well, however, and Craig Stanford, a primatologist and professor of anthropology at the University of Southern California, has suggested that the discovery of spear use by chimpanzees probably means that early humans used wooden spears as well, perhaps, five million years ago.

Neanderthals were constructing stone spear heads from as early as 300,000 BP and by 250,000 years ago, wooden spears were made with fire-hardened points.

From circa 200,000 BCE onwards, Middle Paleolithic humans began to make complex stone blades with flaked edges which were used as spear heads. These stone heads could be fixed to the spear shaft by gum or resin or by bindings made of animal sinew, leather strips or vegetable matter. During this period, a clear difference remained between spears designed to be thrown and those designed to be used in hand-to-hand combat. By the Magdalenian period (c. 15,000–9500 BCE), spear-throwers similar to the later atlatl were in use.

All content from Kiddle encyclopedia articles (including the article images and facts) can be freely used under Attribution-ShareAlike license, unless stated otherwise. Cite this article:
Spear Facts for Kids. Kiddle Encyclopedia.