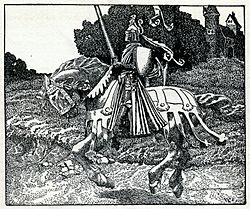 Knight with a lance

A lance is a pole weapon or spear used by a mounted warrior. The lance is longer, thicker and heavier than an infantry spear, and is not intended for throwing, or for quick thrusting. Lances did not have tips meant to break off or bend, unlike many throwing weapons of the spear and javelin family. They often had a vamplate, a small circular plate to prevent the hand sliding up the shaft upon impact.

The lance was longer than a spear, about 9–10 feet long. When charging the lance was carried under the arm (couched) using the weight of the horse and rider to push the lance tip into its intended target. It was a medieval shock and awe weapon (caused great fear) to have a number of mounted knights with lances charging towards you. In may cases it caused panic and the enemy fled the battle.

They were used by European knights, but the use of lances was spread over the Old World wherever horses were available. The use of the lance was made possible by the use of the stirrup added to saddles. It allowed the knight to control the horse and stand in the saddle. As a backup weapon, lancers (one who used a lance) of that period also carried swords, maces (a type of club) or something else suited to hand-to-hand (or close) combat, since the lance was often used only once during an event. It could not be used once the combatants were close to each other.

All content from Kiddle encyclopedia articles (including the article images and facts) can be freely used under Attribution-ShareAlike license, unless stated otherwise. Cite this article:
Lance Facts for Kids. Kiddle Encyclopedia.