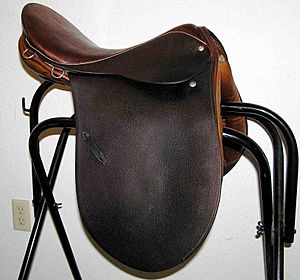 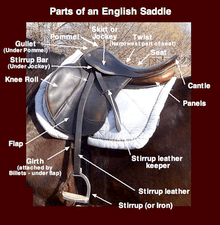 Parts of an English Saddle

A saddle is like a seat for a rider, which is held to an animal's back by a belly strap called a girth. The most common type is the equestrian saddle made for a horse. Saddles have been made for camels and other animals. The earliest saddles were simple pads fixed with a surcingle seen by 800 BC, with the saddle tree coming into use about 200 BC, and paired stirrups by 322 AD Saddles in use today, date back to the 1700s. Today, modern saddles come in different styles, designed for different equestrian activities. They need careful fit for both the rider and the horse. Proper saddle care can extend the useful life of a saddle, often for many years.

The Western saddle is used for horse activities where the rider needs more support than in and english saddle. It is also used for showing, barrel racing, rodeo, and many other sports. The biggest difference is it has a horn on the front, and a higher cantle. This was used originally for tying cattle off when working, so the ranchers could brand or work with the cow. It's now used more widely, in barrel racing it's used for support, in roping events, it's still used to tie cattle.

All content from Kiddle encyclopedia articles (including the article images and facts) can be freely used under Attribution-ShareAlike license, unless stated otherwise. Cite this article:
Saddle Facts for Kids. Kiddle Encyclopedia.