Kashgar, officially known as Kashi, is an oasis city in Xinjiang, People's Republic of China. It is one of the westernmost cities of China, near the border with Afghanistan, Kyrgyzstan, Pakistan, and Tajikistan. With a population of over 500,000, Kashgar has served as a trading post and strategically important city on the Silk Road between China, the Middle East, and Europe for over 2,000 years. 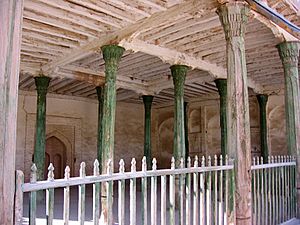 At the convergence point of widely varying cultures and empires, Kashgar has been under the rule of the Chinese, Turkic, Mongol, and Tibetan empires. The city has also been the site of a number of battles between various groups of people on the steppes.

Now administered as a county-level unit of the People's Republic of China, Kashgar is the administrative centre of Kashgar Prefecture, which has an area of 162,000 square kilometres (63,000 sq mi) and a population of approximately 4 million as of 2010. The city itself has a population of 506,640, and its urban area covers 15 km2 (5.8 sq mi), though its administrative area extends over 555 km2 (214 sq mi). The city was made into a Special Economic Zone in 2010, the only city in western China with this distinction. 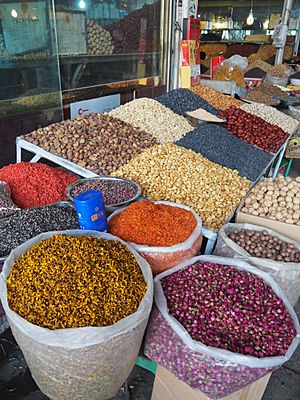 The city has a very important Sunday market. Thousands of farmers from the surrounding fertile lands come into the city to sell a wide variety of fruit and vegetables. Kashgar’s livestock market is also very lively. Silk and carpets made in Hotan are sold at bazaars, as well as local crafts, such as copper teapots and wooden jewellery boxes.

In order to boost the economy in Kashgar region, the government classified the area as the sixth Special Economic Zone of China in May 2010.

The movie The Kite Runner was filmed in Kashgar. Kashgar and the surrounding countryside stood in for Kabul and Afghanistan, since filming in Afghanistan was not possible due to safety and security reasons. 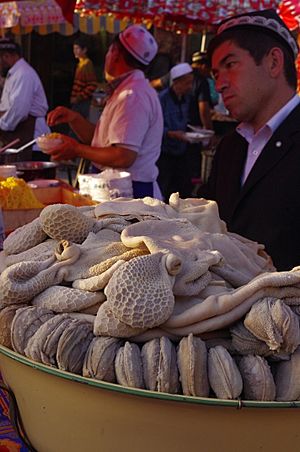 Before its demolition, Kashgar's Old City had been called "the best-preserved example of a traditional Islamic city to be found anywhere in Central Asia". It is estimated to attract more than one million tourists annually.

All content from Kiddle encyclopedia articles (including the article images and facts) can be freely used under Attribution-ShareAlike license, unless stated otherwise. Cite this article:
Kashgar Facts for Kids. Kiddle Encyclopedia.