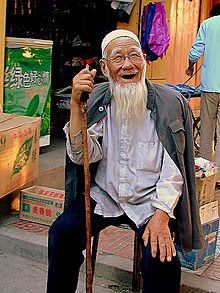 The Hui people (Chinese: 回族; pinyin: Huízú) are one of the 56 recognized ethnic groups in China. Even though they are ethnically related to the Han Chinese (being from the Central Plains) they are considered distinct from them because the majority practice Islam and speak Arabic, unlike most of the Han Chinese. They are called the Hui (which translates into "return" in Chinese) because the Chinese recognize that one of the Five Pillars of Faith in Islam is the hajj, or pilgrimage to Mecca. A traditional name for Islam in Chinese is Huíjiào (回教) for the same reason.

All content from Kiddle encyclopedia articles (including the article images and facts) can be freely used under Attribution-ShareAlike license, unless stated otherwise. Cite this article:
Hui people Facts for Kids. Kiddle Encyclopedia.