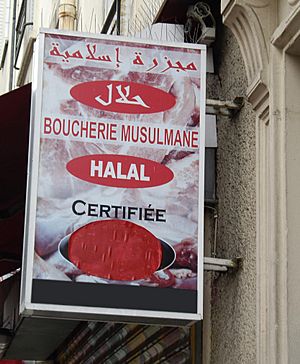 A halal (حلال) sign at a butcher's shop in Paris, France.

Halal (حلال, halāl, halaal) is an Islamic Arabic term meaning "permissible". It has both a general and specific meaning.

Muslims have strict rules of what they can and cannot eat:

A similar concept is the Jewish Kosher (or Kashrut).

All content from Kiddle encyclopedia articles (including the article images and facts) can be freely used under Attribution-ShareAlike license, unless stated otherwise. Cite this article:
Halal Facts for Kids. Kiddle Encyclopedia.