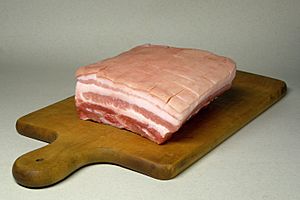 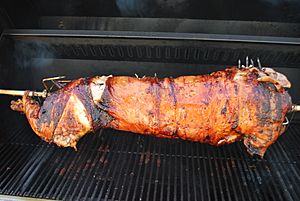 Slow-roasting pig on a rotisserie

Pork is meat that comes from the domestic pig. It is the most commonly consumed meat worldwide, with evidence of pig husbandry dating back to 5000 BC.

A simple meal to make which contains pork is afelia. Sausages, bacon and ham are the most common uses of pork in the United Kingdom, the United States, and other parts of the Western world. 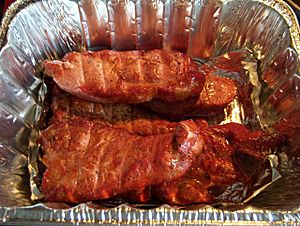 Pork may be cooked from fresh meat or cured over time. Cured meat products include ham and bacon. The carcass may be used in many different ways for fresh meat cuts, with the popularity of certain cuts and certain carcass proportions varying worldwide.

Most of the carcass can be used to produce fresh meat and in the case of a suckling pig, the whole body of a young pig ranging in age from two to six weeks is roasted. Danish roast pork or flæskesteg, prepared with crispy crackling is a national favourite as the traditional Christmas dinner. 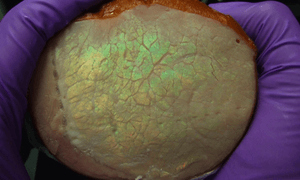 Smoked pork loin showing iridescence due to the fine arrangement of the muscle fibrils. 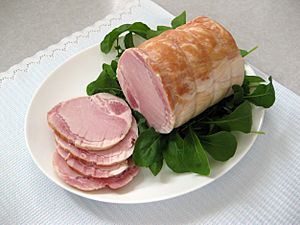 Ham is a popular pork product.

Pork is particularly common as an ingredient in sausages. Many traditional European sausages are made with pork, including chorizo, fuet, Cumberland sausage and salami. Many brands of American hot dogs and most breakfast sausages are made from pork. Processing of pork into sausages and other products in France is described as charcuterie.

Ham and bacon are made from fresh pork by curing with salt (pickling) or smoking. Shoulders and legs are most commonly cured in this manner for Picnic shoulder and ham, whereas streaky and round bacon come from the side (round from the loin and streaky from the belly).

Ham and bacon are popular foods in the west, and their consumption has increased with industrialisation. Non-western cuisines also use preserved meat products. For example, salted preserved pork or red roasted pork is used in Chinese and Asian cuisine.

Bacon is defined as any of certain cuts of meat taken from the sides, belly or back that have been cured or smoked. In continental Europe, it is used primarily in cubes (lardons) as a cooking ingredient valued both as a source of fat and for its flavour. In Italy, besides being used in cooking, bacon (pancetta) is also served uncooked and thinly sliced as part of an antipasto. Bacon is also used for barding roasts, especially game birds. Bacon is often smoked with various wood fuels for up to ten hours. Bacon is eaten fried, baked, or grilled.

A side of unsliced bacon is a "flitch" or "slab bacon", while an individual slice of bacon is a "rasher" (Australia, Ireland, New Zealand and the United Kingdom) or simply a "slice" or "strip" (North America). Slices of bacon are also known as "collops". Traditionally, the skin is left on the cut and is known as "bacon rind". Rindless bacon, however, is quite common. In both Ireland and the United Kingdom, bacon comes in a wide variety of cuts and flavours, and is predominantly known as "streaky bacon", or "streaky rashers". Bacon made from the meat on the back of the pig is referred to as "back bacon" and is part of traditional full breakfast commonly eaten in Britain and Ireland. In the United States, back bacon may also be referred to as "Canadian-style Bacon" or "Canadian Bacon".

The USDA defines bacon as "the cured belly of a swine carcass", while other cuts and characteristics must be separately qualified (e.g. "smoked pork loin bacon"). "USDA Certified" bacon means that it has been treated for Trichinella.

The canned meat Spam is made of chopped pork shoulder meat and ham.

All content from Kiddle encyclopedia articles (including the article images and facts) can be freely used under Attribution-ShareAlike license, unless stated otherwise. Cite this article:
Pork Facts for Kids. Kiddle Encyclopedia.