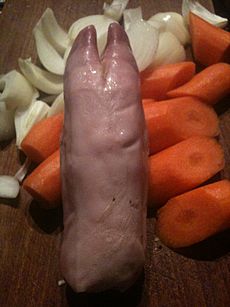 A pig's trotter in front of baby-cut carrots and onions

A pig's trotter, also known as a pettitoe, or sometimes known as a pig's foot, is the culinary term for the foot of a pig. The cuts are used in various dishes around the world, and experienced a resurgence in the late 2000s. 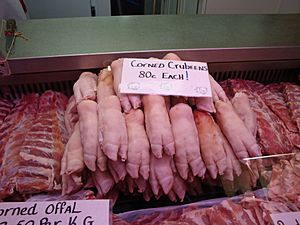 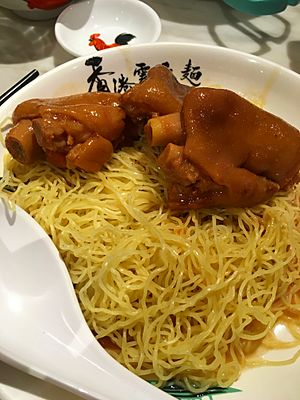 Before sale, the trotters are cleaned and typically have the hairs pulled with a hot tank and beaters. They are often used in cooking to make stocks, as they add thickness to gravy, although they are also served as a normal cut of meat. In Puerto Rico, a tomato-based stew of pigs' trotters with chickpeas is called Patitas de Cerdo. Sometimes potatoes or butternut are added. Chef Marco Pierre White has long served trotters at his restaurants, based on the original recipe of mentor Pierre Koffmann. In the New York City restaurant Hakata Tonton, 33 of the 39 dishes served contain pigs' trotters.

Following the late-2000s financial crisis, there has been a boom in popularity of pigs' trotters in the United Kingdom as a revival in cheap meat recipes occurred. In 2008, British supermarket Waitrose reintroduced trotters to its stores, and found that they quickly became popular. In 2009, Pierre Koffmann set up a pop-up restaurant, and found that diners ate an entire month's stock of 500 pigs' trotters in less than a week.

In Norwegian tradition, pigs feet are salted and boiled and served as syltelabb. This is a pre-Christmas dish because the pig was slaughtered before Christmas, and everything was used. Today syltelabb is for enthusiasts. 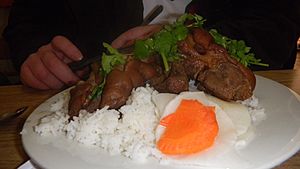 All content from Kiddle encyclopedia articles (including the article images and facts) can be freely used under Attribution-ShareAlike license, unless stated otherwise. Cite this article:
Pig's trotter Facts for Kids. Kiddle Encyclopedia.