Saint Vincent and the Grenadines facts for kids

Saint Vincent and the Grenadines is an island nation in the Caribbean Sea. It is a member of the Commonwealth of Nations, the Organisation of Eastern Caribbean States and CARICOM.

The country speaks English as its official language. The capital, and its main port, is Kingstown.

Saint Vincent and the Grenadines is a parliamentary democracy and constitutional monarchy with Queen Elizabeth II as head of state. The Queen does not live in the islands but she is represented in the country by the Governor-General, currently Sir Frederick Ballantyne.

Control of the government rests with the elected prime minister and his or her cabinet. The current Prime Minister is Ralph Gonsalves.

The country has no formal armed forces, although the police has a Special Service Unit that has a supporting role on the island.

The Parliament is unicameral is formed only by the House of Assembly with 21 seats: 15 representatives elected by popular vote to serve five-year terms and 6 appointed senators. The last elections were held on 13 December 2010 and the next will be held in 2015.

The island now known as Saint Vincent was originally named Youloumain by the native Caribs. The Caribs inhabited Saint Vincent before the Europeans arrived, and it is possible still to find Carib artifacts in the island.

Christopher Columbus explored in 1498 the main island on Saint Vincent's Day. The Caribs did not allowed Europeans to settle in Saint Vincent until 1719 when some French people came from Martinique and began to grow coffee, tobacco, indigo, cotton and sugar cane with the help of African slaves.

In 1834 slavery was abolished and people from the Portuguese island of Madeira and from India came to work as agricultural workers.

The estimated population in 2003 was 103,220. The population density is 265 persons per square kilometre.

The official language of the islands is English but most people use the Vicentian Creole English.

The people of Saint Vincent and the Grenadines was 75% Protestant (47% Anglicans, 28% Methodists), 13% Catholics, 12% other (Hindu, Seventh-Day Adventists, other Protestant).

Saint Vincent and the Grenadines is a group of islands of the Caribbean Sea. It lies to the west of Barbados, south of Saint Lucia and north of Grenada in the Windward Islands of the Lesser Antilles.

There are 32 islands and cays, including the main island of Saint Vincent (344 square kilometres (133 sq mi)) and the northern two-thirds of the Grenadines (45 square kilometres (17 sq mi)), which are a chain of small islands stretching south from Saint Vincent to Grenada. The largest and most populated Grenadines islands are Bequia, Mustique, Canouan and Union Island. 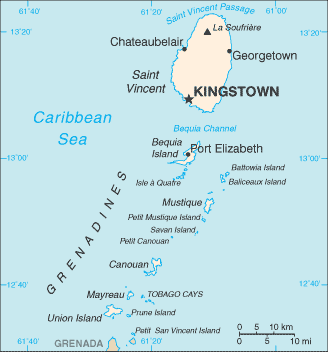 These islands make up the Grenadines Parish

Administratively, Saint Vincent and the Grenadines is divided into six parishes. Five parishes are on Saint Vincent, while the sixth is made up of the Grenadine islands. Kingstown is located in the Parish of Saint George and is the capital city and central administrative centre of the country.

The Köppen climate classification subtype for this climate is Af (Tropical Rainforest Climate).

The average yearly temperature is 27 °C (81 °F). The coolest months are between November and February. During the rainy season, May through October, rain is frequent in the mountains of St. Vincent with the annual average rainfall being 380 centimetres (150 in) away from the coast and 200 centimetres (79 in) on the coast.

All content from Kiddle encyclopedia articles (including the article images and facts) can be freely used under Attribution-ShareAlike license, unless stated otherwise. Cite this article:
Saint Vincent and the Grenadines Facts for Kids. Kiddle Encyclopedia.