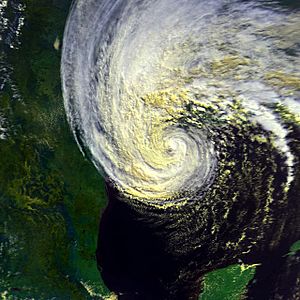 A tropical cyclone is a circular air movement that starts over the warm ocean waters in the warm part of Earth near the Equator. Most tropical cyclones create fast winds and great rains. While some tropical cyclones stay out in the sea, others pass over land. They can be dangerous because of flooding and because the winds pick up objects, including things as big as small boats. Tropical cyclones can throw these things at high speeds.

Tropical cyclones, hurricanes or typhoons form when convection causes warm, moist air above the ocean to rise. They begin as a group of storms when the water gets as hot as 80 °F (27 °C) or hotter. The Coriolis effect made by the Earth's rotation causes the winds to rotate. Warm air rises quickly. Tropical cyclones usually move westward in the tropics, and can later move north or south into the temperate zone. The "eye of the storm" is the center. It has little rain or wind. The eye wall has the heaviest rain and the fastest winds. It is surrounded by rain bands which also have fast winds.

Tropical cyclones are powered by warm, humid ocean air. When they go onto land, they weaken. They die when they spend a long time over land or cool ocean water.

Tropical cyclones are usually given names because it helps in forecasting, locating, and reporting. They are named once they have steady winds of 62 km/h. Committees of the World Meteorological Organization pick names. Once named, a cyclone is usually not renamed.

For several hundred years hurricanes were named after saints. In 1887, Australian meteorologist Clement Wragge began giving women's names to tropical cyclones. He thought of history and mythology for names. When he used men's names, they were usually of politicians he hated. By World War II cyclone names were based on the phonetic alphabet (Able, Baker, Charlie). In 1953 the United States stopped using phonetic names and began using female names for these storms. This ended in 1978 when both male and female names were used for Pacific storms. In 1979 this practice was added for hurricanes in the Gulf of Mexico and the Atlantic. 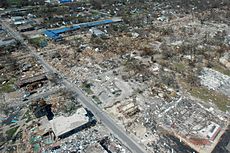 In the past these storms sank many ships. Better weather forecasting in the 20th century helped most ships avoid them. When tropical cyclones reach land, they may break things. Sometimes they kill people and destroy cities. In the last 200 years, about 1.5 million people have been killed by tropical cyclones.

Wind can cause up to 83% of the total damages of a storm. Broken wreckage from destroyed objects can become deadly flying pieces. Flooding can also occur when a lot of rain falls and/or when storm surges push water onto the land.

There is a possibility of "indirect" deaths after a tropical cyclone passes. For example, New Orleans, Louisiana suffered from poor health conditions after Hurricane Katrina hit in 2005.

Tropical cyclones are classified into different categories by their strength and location. The National Hurricane Center, which observes hurricanes in the Atlantic Ocean and Eastern and Central Pacific Ocean, classifies them using the Saffir-Simpson Hurricane Scale.

Tropical cyclones in other places such as the Western Pacific Ocean or the Southern Hemisphere are classified on scales that are quite a bit like the Saffir-Simpson Scale. For example; if a tropical storm in the western Pacific reaches hurricane-strength winds, it is then officially called a typhoon.

A tropical depression is an organized group of clouds and thunderstorms with a clear circulation in air near the ocean and maximum continuing winds of less than 17 m/s (33 kt, 38 mph, or 62 km/h). It has no eye and does not usually have the spiral shape that more powerful storms have. Only the Philippines are known to name tropical depressions.

A tropical storm is an organized system of strong thunderstorms with a very clear surface circulation and continuing winds between 17 and 32 m/s (34–63 kt, 39–73 mph, or 62–117 km/h). At this point, the cyclonic shape starts to form, although an eye does not usually appear in tropical storms. Most tropical cyclone agencies start naming cyclonic storms at this level, except for the Philippines which have their own way of naming cyclones.

A hurricane or typhoon or a cyclone is a large cyclonic weather system with continuing winds of at least 33 m/s (64 kt, 74 mph, or 118 km/h). A tropical cyclone with this wind speed usually develops an eye, which is an area of calm conditions at the center of its circulation. The eye is often seen from space as a small, round, cloud-free spot. Around the eye is the eye wall, an area where the strongest thunderstorms and winds spin around the storm's center. The fastest possible continuing wind speed found in tropical cyclones is thought to be around 85 m/s (165 kt, 190 mph, 305 km/h).

All content from Kiddle encyclopedia articles (including the article images and facts) can be freely used under Attribution-ShareAlike license, unless stated otherwise. Cite this article:
Tropical cyclone Facts for Kids. Kiddle Encyclopedia.