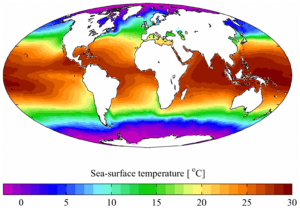 Sea surface temperature (SST) is the water temperature at the surface. In practical terms, the exact meaning of "surface" will vary according to the measurement method used. A satellite infrared radiometer indirectly measures the temperature of a very thin layer (about 10 micrometres thick) or skin of the ocean (leading to the phrase skin temperature) representing the top millimeter; a thermometer attached to an already fastened or wandering buoy in the ocean would measure the temperature at a specific depth (e.g. the top 1 meter below the sea surface); the measurements regularly made from ships are often from the engine water intakes and may be at various depths in the upper 20 m of the ocean. Note that the depth of measurement in this case will vary with the cargo aboard the vessel.

All content from Kiddle encyclopedia articles (including the article images and facts) can be freely used under Attribution-ShareAlike license, unless stated otherwise. Cite this article:
Sea surface temperature Facts for Kids. Kiddle Encyclopedia.