Hurricane Ioke (also Typhoon Ioke, international designation 0612, JTWC designation 01C also sometimes called Super Typhoon Ioke) is the strongest hurricane ever recorded in the Central Pacific. The first storm to form in the Central Pacific in the 2006 Pacific hurricane season, Ioke is a long-lived and extremely powerful storm that traversed the Pacific, reaching Category 5 status twice as a hurricane. As a typhoon, Ioke managed to achieve Category 5-equivalent one-minute sustained winds one more time before weakening.

Ioke did not affect any permanently populated areas in the Central Pacific or Western Pacific basins as a hurricane or a typhoon, but the storm passed over Johnston Atoll as a Category 2 hurricane and Wake Island as a Category 5 typhoon. Despite its strength, Ioke only caused moderate damage to Wake Island, and was not responsible for any fatalities. 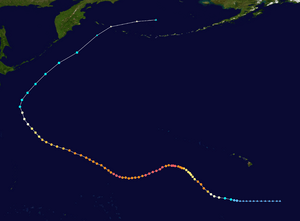 The system began in the third week of August as a persistent tropical disturbance south of the Hawaiian Islands. It was initially embedded in a trough, but gained convection and developed into a tropical depression about 775 miles south of Honolulu on August 19. It continued to strengthen, and the Central Pacific Hurricane Center designated the system with the name Ioke (IPA /iːˈəʊ.keɪ/), which is Hawaiian for the name Joyce, becoming the first tropical storm to form in the Central Pacific since 2002.

Ioke quickly began to enter a process of rapid development; strengthening into a hurricane just 24 hours after it had formed. While safely avoiding the Hawaiian Islands, it continued to rapidly intensify and became a major hurricane (Category 3 or greater) on the morning of August 21. Later that day, Ioke intensified even further into a Category 4 hurricane. On August 22, it began to weaken as a result of cooler water and eyewall replacement cycle, and was downgraded back to a Category 2. As a Category 2 storm, Ioke affected Johnston Atoll. 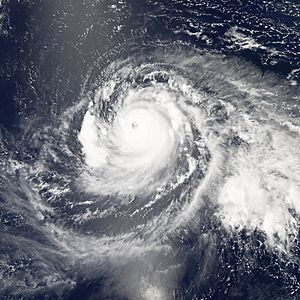 Ioke in the Pacific Ocean

The storm began to rapidly deepen again late on August 23 as it moved over increasingly warm water, reaching major hurricane status for the second time while moving to the west-northwest. From there, conditions would become even more favorable for development.

Overnight between August 24 and August 25, Ioke strengthened rapidly, becoming a Category 5 hurricane on the 25th - the first system originating from the Central Pacific to reach that intensity while still in the Western Hemisphere. Ioke then began to travel over a large environment highly favorable for hurricane development, and would maintain its strength for an extended period of time. Ioke also became the most intense hurricane ever to develop in the Central Pacific, with a central pressure of 921 mbar (27.19 inHg) at that point (which dropped to 920 mbar at its Central Pacific peak).

Ioke began to fluctuate in intensity afterward; weakened back to a Category 4 while undergoing an eyewall replacement cycle, regaining Category 5 strength on August 26. Ioke held that intensity until crossing the International Date Line that evening (August 27 after the crossover), becoming Typhoon Ioke in the process. The storm weakened to Category 4 strength according to the JTWC, but by 2100 UTC on August 29, the JTWC advised that Ioke had regained Category 5 strength for the third time.

After maintaining Category 5 strength for 12 hours, Ioke weakened back to a Category 4 for the final time on August 30 while approaching Wake Island. Ioke passed almost directly over the island on early September 1 and continued tracking to the west-northwest while slowly weakening over gradually cooling waters. On September 3, under the influence of an approaching trough, the typhoon began to recurve to the northwest, then to the north and away from Japan, while weakening more rapidly. Ioke began to transition into an extratropical storm late on September 4 due to increased wind shear and rapidly cooling seas, and the JTWC issued its last advisory at 1200 UTC on September 5 after it was decided that Ioke had begun extratropical transition. The JMA followed suit early on September 7 after Ioke had become completely extratropical east of the Kamchatka Peninsula.

The remnant extratropical low is currently monitored by National Weather Service and is expected to be near Alaska in 48 hours. 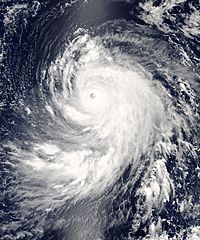 Despite Ioke's extreme intensity and impacting two small land masses, damage was surprisingly moderate. Little damage was done on Johnston Atoll, and damage to infrastructure on Wake Island was less than expected, despite Ioke's eyewall brushing the island.

The National Weather Service reported that the eastern eyewall of Ioke passed over the uninhabited Johnston Atoll, buffeting it with hurricane-force winds.

Twelve people on a United States Air Force vessel in the Pacific were forced to abandon ship and take shelter in a hurricane-proof bunker on the island. They were reported safe the next day, and a reconnaissance flight reported little damage on the island. 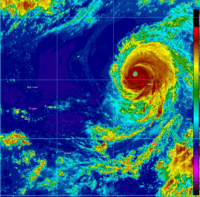 Due to Typhoon Ioke's projected path near Wake Island, all 188 people who live and work there were evacuated in two C-17 Globemaster IIIs to Oahu in Hawaii. The typhoon's powerful winds, estimated to gust as high as 190 mph, damaged weather sensors on the island, causing them to fail after the instruments reported a 100 mph gust. A reconnaissance mission by the Coast Guard indicated the typhoon caused moderate damage on the island, including blown off roofs, damaged sides of buildings, and downed trees. However, the damage was repairable, and the major infrastructure on the island was intact.

The JMA issued evacuation orders for its staff on Minami Torishima on September 1 in view of the approaching typhoon, but so far, no damage has been reported.

All content from Kiddle encyclopedia articles (including the article images and facts) can be freely used under Attribution-ShareAlike license, unless stated otherwise. Cite this article:
Hurricane Ioke Facts for Kids. Kiddle Encyclopedia.