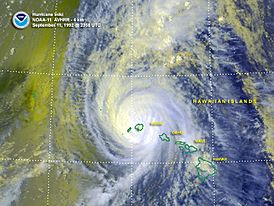 On September 11, 1992, Hurricane Iniki caused more than US$3 billion of damage in Hawai'i.

The Central Pacific Hurricane Center (CPHC) of the United States National Weather Service is the official body responsible for tracking and issuing tropical cyclone warnings, watches, advisories, discussions, and statements for the Central Pacific region: from the equator northward, 140°W–180°W, most significantly for Hawai‘i. It is the Regional Specialized Meteorological Center (RSMC) for tropical cyclones in this region, and in this capacity is known as RSMC Honolulu.

Based in Honolulu, Hawai‘i, the CPHC is co-located with the National Weather Service's Honolulu forecast office on the campus of the University of Hawai‘i at Mānoa. The Honolulu forecast office activates the CPHC when tropical cyclones form in, or move into, the Central Pacific region. The CPHC replaced the previous forecaster, the Joint Hurricane Warning Center, starting in the 1970 season.

Since the 1990s, the CPHC has used the Automated Tropical Cyclone Forecasting System to create forecasts, advisories, and their associated graphics

All content from Kiddle encyclopedia articles (including the article images and facts) can be freely used under Attribution-ShareAlike license, unless stated otherwise. Cite this article:
Central Pacific Hurricane Center Facts for Kids. Kiddle Encyclopedia.