The Joint Typhoon Warning Center (JTWC) is a joint United States Navy – United States Air Force command located in Pearl Harbor, Hawaii. The JTWC is responsible for the issuing of tropical cyclone warnings in the North-West Pacific Ocean, South Pacific Ocean, and Indian Ocean for all branches of the U.S. Department of Defense and other U.S. government agencies. Their warnings are intended for the protection of primarily military ships and aircraft as well as military installations jointly operated with other countries around the world.

Its U.S. Navy components are aligned with Naval Meteorology and Oceanography Command. 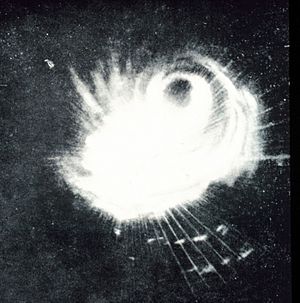 The origins of the Joint Typhoon Warning Center can be traced back to June 1945, when the Fleet Weather Center/Typhoon Tracking Center was established on the island of Guam, after multiple typhoons, including Typhoon Cobra of December 1944 and June 1945, had caused a significant loss of men and ships. During 1958, the United States Department of Defense weather services and the Weather Bureau formed the Joint Meteorology Committee to the Pacific Command and proposed the formation of a joint Navy and Air Force center for typhoon analysis and forecasting. The Joint Chiefs of Staff, gave permission for the centre to be set up effective May 1, 1959, under the command of the Fleet Weather Center's commander.

The JTWC initially consisted of ten people with two officers and three enlisted personnel provided by each service. It was required to provide warnings on all tropical cyclones, between the Malay Peninsular and the International Dateline for US government agencies. They also had to determine reconnaissance requirements, prepare annual typhoon summaries, and conduct research into tropical cyclone forecasting and detection. In November 1962, Typhoon Karen destroyed the building housing the Fleet Weather Center/Joint Typhoon Warning Center.

It relocated in a more typhoon-proof building in 1965. Between 1971 and 1976, CINCPAC gradually expanded out the JTWC's area of responsibility, to include the area between the International Dateline and the African coasts. In October 1978, the Fleet Weather Center/JTWC became the Navy Oceanographic Command Center/Joint Typhoon Warning Center and responsible for the whole oceanic environment, from the bottom of the ocean to the top of the atmosphere.

The Center is manned by about 37 U.S. Air Force and Navy personnel. The JTWC uses several satellite systems and sensors, radar, surface and upper level synoptic data as well as atmospheric models to complete its mission.

All content from Kiddle encyclopedia articles (including the article images and facts) can be freely used under Attribution-ShareAlike license, unless stated otherwise. Cite this article:
Joint Typhoon Warning Center Facts for Kids. Kiddle Encyclopedia.