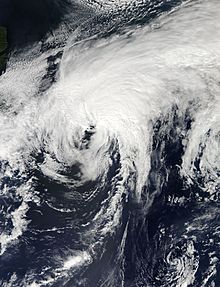 An extratropical cyclone (also called a mid-latitude cyclone) is a type of cyclone. It is a large low-pressure weather area with clouds, rain and heavy wind. They occur in areas that are between latitudes 30° – 60° from the equator. They are not the same as tropical cyclones or low-pressure weather areas from polar zones. They are actually many masses of cold and warm fronts producing rain, heavy wind, and sometimes tornadoes and even hail.

An extratropical cyclone turns anticlockwise in the Northern Hemisphere. The shape is circular or oval. The usual size in diameter is about 1000 km. These cyclones are usually connected with fronts. A front is a system of changes in weather. It is caused by a very cold air mass meeting a very hot air mass. In the cyclone, there is a system of warm front and cold front. The center of a cyclone is cloudier. There is also a very high chance of precipitation. The wind is strong and changes its direction, as the warm front passes. The weather is stable and fog is usual. As the cold front passes, there is a change of wind, the temperature decreases and rain is also common. 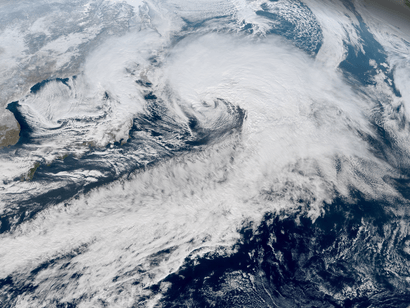 A powerful extratropical cyclone over the North Pacific Ocean in January 2018, with an eye-like feature and a long cold front extending to the tropics

Some extratropical cyclones are made from tropical cyclones that become weak but do not die when they move over cold water. Sometimes, these weather areas can become even stronger than before as they turn into extratropical cyclones. When made from tropical cyclones, they can still have an eye (a place in the middle of a tropical cyclone that is not as windy, cloudy, or rainy). European windstorms are sometimes made when wind from the northwestern part of the Atlantic carry them more east and north towards Europe. Nor'easters often hit northeastern North America, and are made when it is cold, most often in late fall. Wind from the west part of the Atlantic moves them north. They become stronger, and drop snow on the areas it moves into. When a nor'easter drops in pressure and become stronger, by more than one millibar every hour, it is called a weather bomb. Hurricane Hazel was extratropical but still hurricane-level when it hit Toronto, for example. 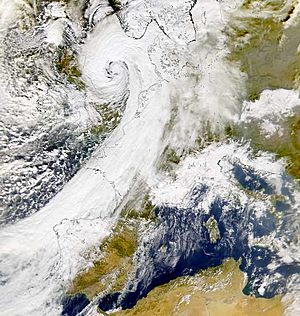 Cyclonal defects usually occur in series called "the families of the cyclones". Usually, there is a belt of 3 or 4 cyclones in different stages. The cyclone has several stages of evolution. First, there is a stage of the origin of a cyclone. Second stage means that the cyclone is strengthening. At that moment, both the warm and cold front are very large. The system is moving very fast. The cold front is generally faster, which means that it runs down the warm one. This causes an occluded front. The weather is similar to both types of fronts. The third stage ends with filling of the area with air. The pressure rises. Stage four means that the signs of cyclonal weather disappear.

A violent storm during the Crimean War on November 14, 1854, wrecked 30 vessels, and sparked initial investigations into meteorology and forecasting in Europe. In the United States, the Columbus Day Storm of 1962, one of many Pacific Northwest windstorms. Hurricane Sandy also became extratropical before it's landfall.

All content from Kiddle encyclopedia articles (including the article images and facts) can be freely used under Attribution-ShareAlike license, unless stated otherwise. Cite this article:
Extratropical cyclone Facts for Kids. Kiddle Encyclopedia.