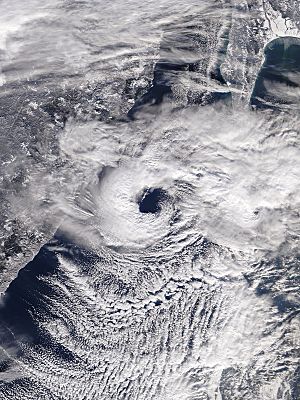 Polar low over the Sea of Japan in December 2009

A polar low is a small sized and short-lived atmospheric low pressure system that is found over the ocean areas pole ward of the main polar front in both the Northern and Southern Hemispheres. The systems usually have a horizontal length scale of less than 1,000 km and live for less than a couple of days. They are part of the larger class of mesoscale weather systems. Polar lows can be difficult to detect using standard weather reports and are a problem to high-latitude operations, such as shipping and gas and oil platforms.

Polar lows have been also known as by using many other terms, such as comma cloud, mesocyclone, polar mesoscale vortex, Arctic hurricane, Arctic low, and cold air depression. Today the term is usually set aside for the more-energetic systems that have near-surface winds of at least gale force (17 m/s).

All content from Kiddle encyclopedia articles (including the article images and facts) can be freely used under Attribution-ShareAlike license, unless stated otherwise. Cite this article:
Polar low Facts for Kids. Kiddle Encyclopedia.