Sea of Japan facts for kids

The Sea of Japan/East Sea is a sea in the western Pacific Ocean. It is bordered by Korea to the west, Russia to the north and Japan to the east and south.

The Sea of Japan is a sea in the north-western edge of the Pacific Ocean. It is divided from this ocean by the Japanese Archipelago, including Sakhalin, Hokkaidō and Honshū. It is surrounded by these islands and the Eurasian Continent. It covers 978,000 square km. The average depth is 1,667 meters. The depth of the deepest point is 3,742 meters. Five (or Six) narrow channels of water link the Sea of Japan and other seas: the Strait of Tartary and La Pérouse Strait with the Sea of Okhotsk; the Tsugaru Strait with the Pacific Ocean; the Kanmon Straits with the Seto Inland Sea; the Busan and Tsushima Strait with the East China Sea. 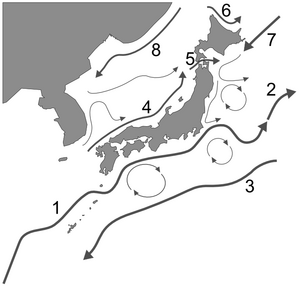 The oceanic structure of the Sea of Japan can be divided by depth into two: the surface water of higher layer than the depth of 300 meters, and the deep sea water of lower than this. The surface sea currents circulate in the counterclockwise direction. One of them is the Tsushima Current, which is a warm current from the Korean Straits to the north-east direction along the shore of the Japanese Archipelago and mainly considered to be the branch of the Kuroshio Current. The other is the Liman Current, which is a cold current from the Strait of Tartary to the south-west direction along the shore of the Eurasian continent.

The International Hydrographic Organization(IHO) decided to call this area the "Sea of Japan" in 1929.

Since 1992, South Korea has asked the world to use the names "East Sea" or "Sea of Korea" instead of "Sea of Japan". South Korea argues that this sea has been called "East Sea" since early times. It is also a Korean belief that the name "East Sea" was eliminated from maps of the world in the early 20th century while South Korea was under the rule of Japan.

However, Japan says that the name "Sea of Japan" has been used more widely than "East Sea" in Europe and America since before the 18th century. Japan also argues that if there were no Japan, there would be no sea.

All content from Kiddle encyclopedia articles (including the article images and facts) can be freely used under Attribution-ShareAlike license, unless stated otherwise. Cite this article:
Sea of Japan Facts for Kids. Kiddle Encyclopedia.