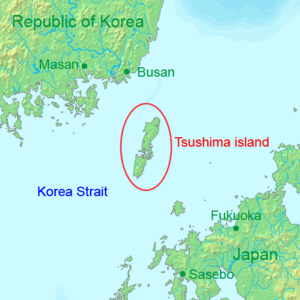 Tsushima Strait (対馬海峡, Tsushima Kaikyō), also known as the Korea Strait, is a narrow body of water between Japan and South Korea. The name is used in two ways. It is used generally to describe the ocean area between Korea and Japan; and it also identifies the sea passage between the islands of Kyushu and Tsushima.

The strait links the East China Sea and the Sea of Japan in the northwest Pacific Ocean. Tsushima Island is between the western channel (Korea Strait) and the eastern channel (Tsushima Strait).

A warm current (Tsushima-kairyū) runs through the straight from south to north.

All content from Kiddle encyclopedia articles (including the article images and facts) can be freely used under Attribution-ShareAlike license, unless stated otherwise. Cite this article:
Tsushima Strait Facts for Kids. Kiddle Encyclopedia.