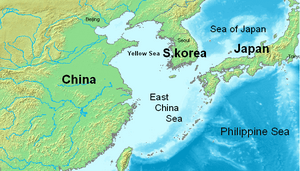 The East China Sea is a marginal sea east of China. It is a part of the Pacific Ocean and covers an area of 1,249,000 km². In China, the sea is called the East Sea. In Korea, the sea is sometimes called "South Sea", but this is more often used to speak only of the area near South Korea's southern coast.

The East China Sea is bounded on the East by Kyūshū and the Ryūkyū Islands, on the South by Taiwan, and on the West by mainland China. It is connected with the South China Sea by the Taiwan Strait and with the Sea of Japan by the Korea Strait; it opens in the North to the Yellow Sea.

Territories with borders on the sea (clockwise from north) include: South Korea, Japan, Taiwan, and Mainland China.

The Yangtze River (Chang Jiang) is the largest river flowing into the East China Sea.

All content from Kiddle encyclopedia articles (including the article images and facts) can be freely used under Attribution-ShareAlike license, unless stated otherwise. Cite this article:
East China Sea Facts for Kids. Kiddle Encyclopedia.