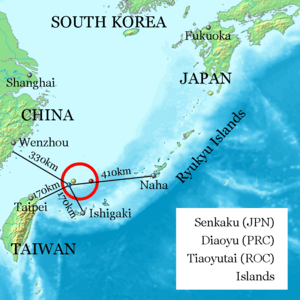 The group of islands, islets and rocks is east of mainland China, northeast of Taiwan, west of Okinawa, and north of the southwestern end of the Ryukyu Islands. The islands are about 200km from Taiwan, and about 300 km from Okinawa. 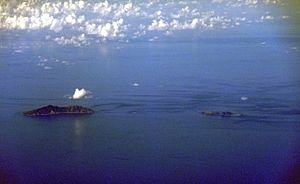 Three of the Senkaku Islands

Control over these islands and rocks is disputed. The dispute issues are complex.

The Japanese government describes the islands as part of Japan.

The islands are also described as part of China.

The United States occupied the islands from 1945 to 1972 when they reverted to Japan. The official US position is neutral in a dispute among Japan, China and Taiwan.

All content from Kiddle encyclopedia articles (including the article images and facts) can be freely used under Attribution-ShareAlike license, unless stated otherwise. Cite this article:
Senkaku Islands Facts for Kids. Kiddle Encyclopedia.