Provinces of Japan facts for kids 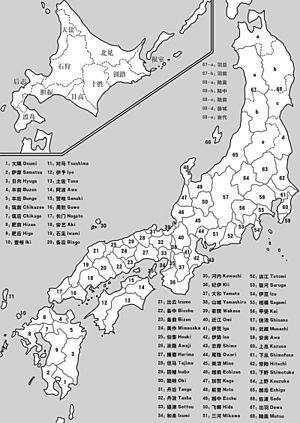 Map of the former Japanese provinces

The provinces of Japan (令制国code: ja is deprecated ) were historical subdivisions of the island country. They developed and changed from the 7th century until the Meiji Period. In the 1870s, the provincial system was replaced by a new system of prefectures.

The early provinces were created by Imperial decree. Over time, there were many changes in the numbers of provinces.

The national system of provinces was established at the beginning of the 8th century.

The borders of the provinces were often changed until the end of the Nara period.

From the Heian Period through Edo period, provincial borders were generally stable, but there were some changes.

In the early Meiji period some provincial borders were changed before the prefectural system was established.

All content from Kiddle encyclopedia articles (including the article images and facts) can be freely used under Attribution-ShareAlike license, unless stated otherwise. Cite this article:
Provinces of Japan Facts for Kids. Kiddle Encyclopedia.