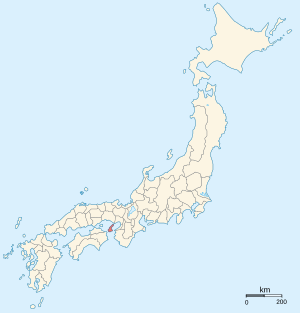 Awaji Province (淡路国, Awaji-no kuni, formerly 淡道) was a Japanese island province in the Seto Inland Sea near Hyōgo Prefecture on the island of Honshū. It was sometimes called Tanshu (淡州).

Awaji Island is between Honshū and the island of Shikoku. Awaji means literally "Road to Awa". It was the route for traveling to Awa Province from the central part of Japan. 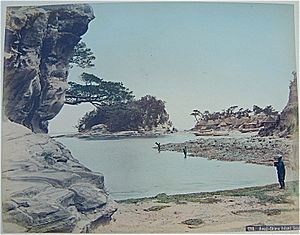 In 764, Emperor Junnin was sent into exile on Awaji. He died on the island in 765. The former emperor was known as Awaji no Haitei.

In the Meiji period, the provinces of Japan were converted into prefectures. The maps of Japan and Awaji Province were reformed in the 1870s.

Izanagi jinja was the chief Shinto shrines (ichinomiya) of Awaji.

All content from Kiddle encyclopedia articles (including the article images and facts) can be freely used under Attribution-ShareAlike license, unless stated otherwise. Cite this article:
Awaji Province Facts for Kids. Kiddle Encyclopedia.