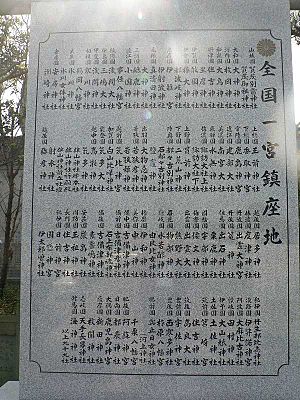 Ichinomiya (一宮, also 一の宮 or 一之宮, first shrine) is a Japanese term for the chief Shinto shrines in each of the pre-modern provinces.

The ichinomiya are the shrines with the highest shrine rank in an area. Shrines of the lower rank are called ninomiya (二宮, second), sannomiya (三宮, third), shinomiya (四宮, fourth), and so forth.

When prefectures were established in the Meiji period, the old system of provincial ichinomiya was not changed. Each new prefecture had one or more ichinomiya.

All content from Kiddle encyclopedia articles (including the article images and facts) can be freely used under Attribution-ShareAlike license, unless stated otherwise. Cite this article:
Ichinomiya Facts for Kids. Kiddle Encyclopedia.