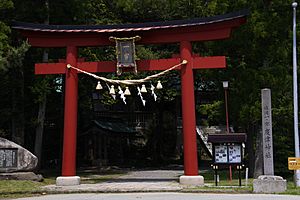 Watatsu-jinja (度津神社code: ja is deprecated ) is a Japanese Shinto shrine at Sado, Niigata, which is an island in the Sea of Japan.

The shrine was established before the 10th century. This place is special to the kami named Isonotakeru no mikoto (五十猛命code: ja is deprecated ). Isonotakeru is said to have taught people shipbuilding and how to use ships.

Each year in late-April, horseback archery (yabusame) takes place at the branch Hachimangū of Watatsu Shrine in the town of Hamochi.

Watatsu was the chief Shinto shrine (ichinomiya) of the old Sado Province on Sado Island. It serves today as one of the ichinomiya of Niigata Prefecture.

In the modern system of ranked Shinto Shrines, Watatsu was listed among the 3rd class of nationally significant shrines or Kokuhei Shōsha (国幣小社code: ja is deprecated ).

All content from Kiddle encyclopedia articles (including the article images and facts) can be freely used under Attribution-ShareAlike license, unless stated otherwise. Cite this article:
Watatsu-jinja Facts for Kids. Kiddle Encyclopedia.