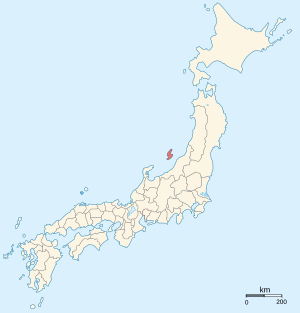 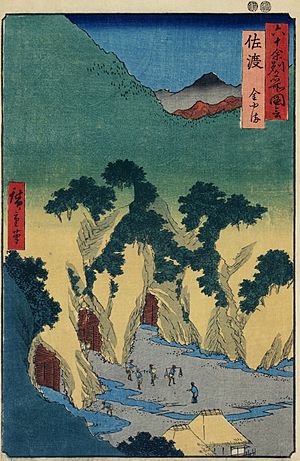 Sado Province was created during the reign of Empress Genshō.

In 1221, Emperor Juntoku was sent into exile on Sado Island. The former emperor is sometimes identified as Sado-no In (佐渡院code: ja is deprecated ) because his last years were spent at Sado. Juntoku remained at Sado until his death in 1242.

In the Edo period, gold was discovered and mined. The Sado mines were added to the tentative World Heritage List in 2010.

In the Meiji period, the provinces of Japan were converted into prefectures. The maps of Japan and Sado Province were reformed in the 1870s.

Sado is an island in the Sea of Japan. It was off the coast of Echigo Province.

Watatsu-jinja was the chief Shinto shrine (ichinomiya) of Sado.

All content from Kiddle encyclopedia articles (including the article images and facts) can be freely used under Attribution-ShareAlike license, unless stated otherwise. Cite this article:
Sado Province Facts for Kids. Kiddle Encyclopedia.