Prefectures of Japan facts for kids 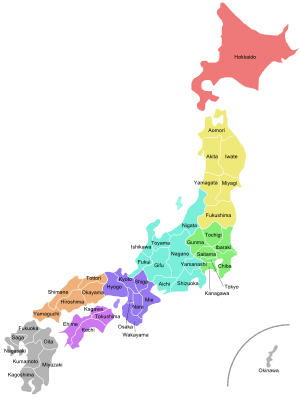 Map of the regions and prefectures of Japan

Prefectures of Japan (都道府県code: ja is deprecated , todōfuken) are one of the basic local entities of Japan. They are the 47 subdivisions of the countries. Prefectures are the governmental bodies of Japan which are larger than cities, towns, and villages.

The former provinces of Japan were converted into prefectures between 1876 and 1879.

The word todōfuken combines the suffixes of the names of the 47 prefectures. The fur suffixxes are:

Before World War II, different laws applied to fu and ken, but now two types of prefecture are the same, outside of their names.

The prefectures are often grouped into these nine regions (Chihō). The regions are not formally specified, they do not have elected officials, and they are not corporate bodies. However, the practice of ordering prefectures based on their geographic region is traditional. This ordering is mirrored in Japan's International Organization for Standardization (ISO) coding. From north to south, the prefectures of Japan and their commonly associated regions are listed in traditional and in ISO 3166-2:JP order:

Okinawa Prefecture is traditionally thought of as part of the Kyūshū region of Japan. Okinawa Prefecture is made up of islands which are southwest of the island of Kyushu. The Japanese government recognizes the prefecture as its own region in new 9-region, 11-region and 13-region systems.

The default alphabetic order in this sortable table can be altered to mirror the traditional Japanese regions and ISO parsing.

All content from Kiddle encyclopedia articles (including the article images and facts) can be freely used under Attribution-ShareAlike license, unless stated otherwise. Cite this article:
Prefectures of Japan Facts for Kids. Kiddle Encyclopedia.