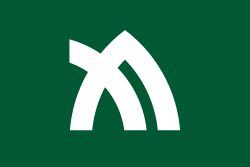 Kagawa Prefecture (香川県, Kagawa-ken) is a prefecture in the Shikoku region of Japan on the island of Shikoku. The capital city is Takamatsu.

Drought is common in Kagawa history. For example, in 1973 the region was called "the Takamatsu desert".

Tamura jinja is the chief Shinto shrine (ichinomiya) in the prefecture.

All content from Kiddle encyclopedia articles (including the article images and facts) can be freely used under Attribution-ShareAlike license, unless stated otherwise. Cite this article:
Kagawa Prefecture Facts for Kids. Kiddle Encyclopedia.