Kids Encyclopedia Facts
This page is about the island of Shikoku. For the region, see Shikoku region. 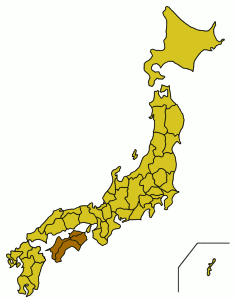 Map of Japan with the island of Shikoku highlighted in brown

Shikoku (四国) is one of Japan's four main islands. It is the smallest island.

The island lies southeast of Honshu and northwest of Kyūshū across the Kanmon Strait.

Farming is a very important business in Shikoku. Citrus fruits are an important product. Shikoku is the home of the 88 Temple Pilgrimage of the Shingon sect of Buddhism.

The name Shikoku literally means "four countries" in Japanese. Shikoku was made of four old "countries" or provinces that are now prefectures. In other words, each prefecture has a modern name and an old provincial name. The old names are still used sometimes, especially for foods, music, or art.

There are twelve original castles left in Japan and Shikoku is home to four of them.

The 88 Temple Pilgrimage is a famous but difficult 1,647-kilometer circle around the entire island. Serious pilgrims may choose to complete the 88 Temple Circuit on foot. Other people uses buses.

All content from Kiddle encyclopedia articles (including the article images and facts) can be freely used under Attribution-ShareAlike license, unless stated otherwise. Cite this article:
Shikoku Facts for Kids. Kiddle Encyclopedia.