Kōchi is the capital city of Kōchi Prefecture located on the island of Shikoku in Japan.

A symbol of the city is its most famous dish, katsuo tataki, made by lightly searing and seasoning bonito. 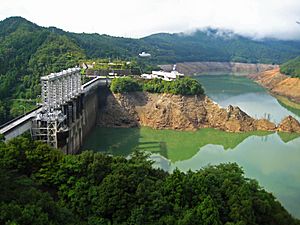 The area of Kōchi has three distinct geographic sections. The major settled part of the city lies at the head of Urado Bay, in a narrow alluvial plain crossed by several rivers, notably the Kagami River and Kokubu River. The plain is bounded by mountains to the north and a range of hills to the south and west.

The northern mountains form the least densely populated part of the city, with the only settlement being along narrow river valleys. The highest point in Kōchi is Kuishi-yama at 1,176 metres (3,858 ft).

To the south of the city centre, Urado Bay cuts through the hills to its outlet into the Pacific Ocean. The land surrounding the bay and a small strip of the coastline form the third part of the city. This area, although hillier and less dense than the plain, is nevertheless a major location of housing and port-related industry.

Kōchi has a very wet humid subtropical climate, receiving twice as much rainfall as Shikoku’s other chief cities Matsuyama and Takamatsu.

It is also the most typhoon-prone of Japan’s major cities owing to its location directly exposed to the open Pacific Ocean from which the storms enter the country, and has twice received over 50 cm (20 in) of rainfall in a day from a typhoon. 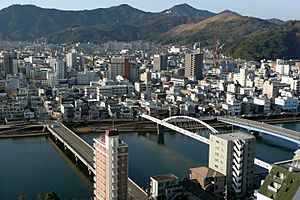 The river plain now containing the city centre was originally settled as a castle town around the seat of the lords of Tosa Province, Kōchi Castle. The castle site was chosen by Lord Yamauchi Kazutoyo in 1601. The city takes its name from that of the castle. As the centre of administration for the province, and the prefecture which succeeded it, the town rapidly grew to become the largest settlement of the region.

During the time of the Meiji Restoration, Kōchi became famous as a centre of pro-imperial ideology, and later for incubating democratic and human rights movements. 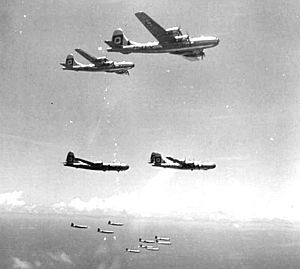 Kōchi was selected as a target by the United States' XXI Bomber Command because of the city's status as a prefectural capital, and the fact that it was a center for industry and commercial trade.

All content from Kiddle encyclopedia articles (including the article images and facts) can be freely used under Attribution-ShareAlike license, unless stated otherwise. Cite this article:
Kōchi, Kōchi Facts for Kids. Kiddle Encyclopedia.