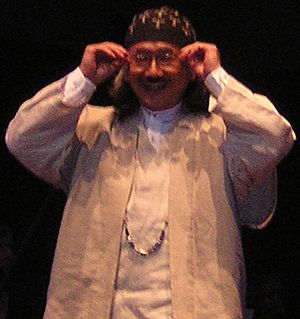 Uematsu at a Distant Worlds concert on July 11, 2009 in Seattle

In this Japanese name, the family name is Uematsu.

Nobuo Uematsu (植松 伸夫; Uematsu Nobuo, born March 21, 1959) is a Japanese composer of video game music. He stays busy making lots of different types of music for games. A lot of the music he makes is for games produced by Squaresoft and Square Enix, including the Final Fantasy series of role-playing games, and some music for Chrono Trigger.

All content from Kiddle encyclopedia articles (including the article images and facts) can be freely used under Attribution-ShareAlike license, unless stated otherwise. Cite this article:
Nobuo Uematsu Facts for Kids. Kiddle Encyclopedia.