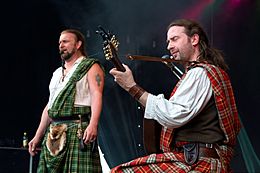 Celtic music is a broad grouping of music genres that evolved out of the folk musical traditions of the Celtic people of Western Europe. It refers to both orally-transmitted traditional music and recorded music and the styles vary considerably to include everything from "trad" (traditional) music to a wide range of hybrids. 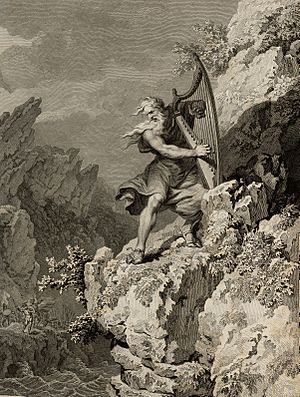 An 18th century depiction of an ancient Druid playing the harp

Celtic music means two things mainly. First, it is the music of the peoples identifying themselves as Celts. Secondly, it refers to whatever qualities may be unique to the musics of the Celtic Nations. Many notable Celtic musicians such as Alan Stivell and Paddy Moloney claim that the different Celtic musics have much in common. These common melodic practices may be used widely across Celtic Music: 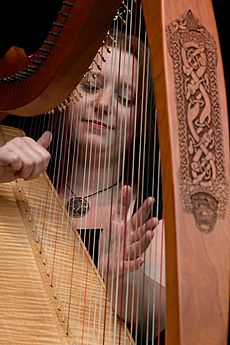 Celtic harp performed at a Celtic festival in 2010

Often, the term Celtic music is applied to the music of Ireland and Scotland because both lands have produced well-known distinctive styles which actually have genuine commonality and clear mutual influences. The definition is further complicated by the fact that Irish independence has allowed Ireland to promote 'Celtic' music as a specifically Irish product. However, these are modern geographical references to a people who share a common Celtic ancestry and consequently, a common musical heritage.

All content from Kiddle encyclopedia articles (including the article images and facts) can be freely used under Attribution-ShareAlike license, unless stated otherwise. Cite this article:
Celtic music Facts for Kids. Kiddle Encyclopedia.